The Minister of Infrastructure and Transport decided after the examination of the Finding to impose the maximum administrative fine provided by law.

THE Minister of Infrastructure and Transport Mr. Costas Karamanlis decided the enforcement of maximum fine provided by Law 4663/2020 in companies Attiki Odos SA (Concessionaire Company) and Attica Routes SA (Operation and Maintenance Company of Attiki Odos) for their fault for the traffic jam and the accompanying problems that arose after the snowfall January 24, 2022. Specifically, it was imposed a fine of EUR 1 million in every company. His decision Minister relied on Finding handed to him by Commission of Inquiry who had composed the Ministry.

Mr. Karamanlis stated in this regard: “After what inadmissibly happened in Attiki Odoshis Government Kyriakou Mitsotaki pledged to take responsibility. To do this, the Ministry had planned to establish by 2020 the legal framework for accountability to concessionaires when highways close. With the article 65 of Law 4663we put a definitive end to the phenomenon of creating problems in road network and then to do not pay anyone. And so today, for the first time we can impose fines totaling EUR 2 million.

Finally at Hellas become the obvious, which until recently was unthinkable. In less than a month, a Commission of Inquiry was set up, studied the data, and came to conclusions about the perpetrators and their responsibilities and we imposed the maximum fine. Which of course is independent of the amounts that the company gives to citizens after his personal intervention Prime Minister. Because these are the few things we can – and should – do after such a serious incident, so that everyone understands that we are now a modern, benevolent State in which everyone assumes their responsibilities. “ 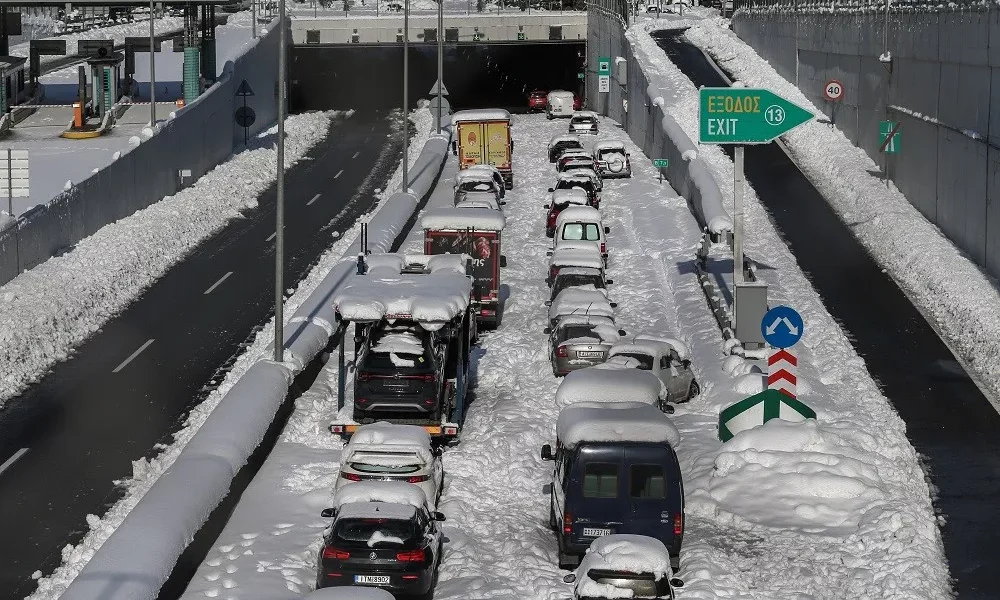 As shown by Conclusion of the Commission of Inquiry:

-The responsible of Attica Routes Company SA did not apply, as they should, what is provided in Operation Manual and to Snow removal manual of Attiki Odoswhere the snow removal procedures of Attiki Odos and the decision makers are accurately recorded.

-Additionally, according to data examined, its managers Attica Routes Company SA neither requested nor suggested it Attiki Odos Traffic Department at no time, him exclusion of entrances to Attiki Odos.

And this despite the fact that its business leaders Attica Routes Company SA they knew or should have known him appropriate management of one event of such a scale, where the timely is provided partial exclusion its entrances Attiki Odos.

The wrong one assessment of the situation and of operational capabilities on her behalf Attica Routes Company SA eventually led to irreversible effect. Specifically, the decision to partially block its entrances Attiki Odos should have been taken no earlier than 11:00 a.m. If this had happened, then what followed would not have happened or would have happened occur on a much smaller scale.

Her position Commission is based on their images traffic cameras in Free Avenue Elefsina – Stavros – Spata Airportin the section by Kifissia junction up to Marathon junction and to Western Peripheral Avenue of Ymittos. The cameras also record significant omissions in the snow removal process.

It should be noted that in his recorded conversations Traffic Management Center with the Attiki Odos Traffic Departmentalready recorded by too earlyat 10:33 a.m., intense speculation as to whether it is possible to hold on the road is open.

-Also, the Concessionaire Attiki Odos SA Company, which in accordance with its provisions Concession Agreementis obliged to take all appropriate measures for its safe, orderly and high level of service operation Project, the smooth and unhindered conduct of public traffic and the immediate and effective response to emergencies and / or emergencies, to fully ensure the security of users (people and vehicles).

Based on the above “Attiki Odos SA”although it has contracted the Operation and Maintenance of the Motorway in Attiki Diadromes SA, It had to exercise proper control over the company in question, in order to ensure that it complies with all its obligations to the Greek State. Therefore the Concessionaire Company “Attiki Odos SA” he’s got full responsibility vis-.-vis the State for failure control of Company ATTICA ROUTES SA

From the above Commission of Inquiry concludes that those responsible for stopping traffic in Free Avenue Elefsina – Stavros – Spata Airport and Western Peripheral Avenue of Ymittos the January 24, 2022 and the consequences problems was so the Concessionaire Company “Attiki Odos SA”, as well as the Attica Routes Company SA

Given its duration traffic jamsthe area, the concequenses of this (large number caged vehicles, extended time for their release as well suffering of the onboarders and even in extremely low temperature conditions) and the degree of fault of both her Concessionaire Companyas well as the company Attica Routes SA the Commission of Inquiry recommended:

1.To impose on Concessionaire Company “Attiki Odos SA” the maximum amount of the administrative fine provided by the provisions of paragraph 8 of article 65 of law 4663/2020.

2. To be imposed on the company Attica Routes SA (Operation and Maintenance Company of Attiki Odos) the maximum amount of the administrative fine provided by the provisions of paragraph 8 of article 65 of law 4663/2020.

READ ALSO:
Attiki Odos: Do not worry ουμε we have it!
Attiki Odos: “Hate” for the Greek State that gave her the project
What is the fine that Attiki Odos will pay? – What does the contract say?