Volkswagen’s new electric all-rounder is unveiled in a few days. His name: ID. Buzz and ID. Buzz Cargo and the world premiere is scheduled for Wednesday, March 9, 2022.

A fleet of ID. Buzz (in five-seater configuration) and ID. Buzz Cargo (van) are currently touring European capitals and cities, in a final testing phase

Volkswagen has introduced a prototype of the ID. Buzz at the Detroit Auto Show in January 2017 and caught all the spotlight. The gradual transition of the model to production was a pleasant one-way street for the company, after the huge positive response from the public and experts.

Five years later and thousands of hours of evolution, the ID. Buzz, a car that brings ups and downs in electric propulsion, is ready for its world premiere. The countdown has already started, with the model, the purely electric and without emissions Bulli of the new era to be unveiled on Wednesday 9 March. In fact, they will be presented two versions of it, the ID. Buzz in five-seater configuration and ID. Buzz Cargo, as van. 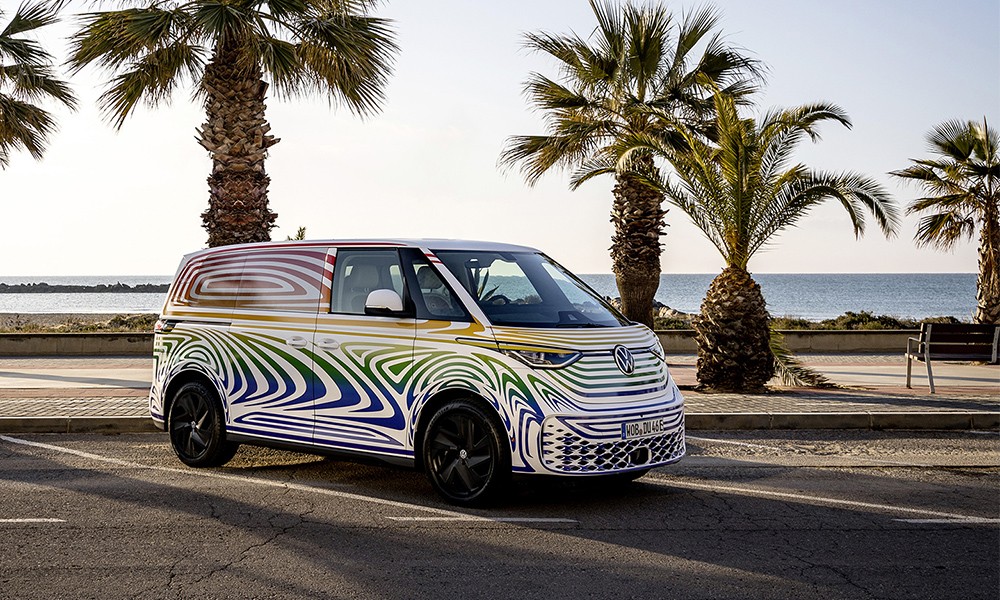 Volkswagen Commercial Vehicles has started the final phase of ID testing. Buzz, on public roads. A fleet of pre-production cars is in circulation in Barcelona, ​​Paris, London, Amsterdam, Copenhagen, Hamburg and Hannover.

The goal is so a few extra hundreds of miles of traffic in real conditions as well as the vigilance of the European public for a model that brings the historical heritage of Bulli, in the era of electrification.

The IDs. Buzzes already in circulation are slightly camouflaged. Nevertheless, it is understood that the final form of the car is slightly different from the 2017 prototype, while the similarities with the legendary T1, the Bulli archetype that was presented almost 70 years ago, are also obvious.

These elements include short projectors, maximum use of space with compact dimensions, the classic design division of the body in upper and lower level, plus the indisputable “face” with the shape “V”. And just like the original Bulli, the ID. Buzz also has rear wheel drive.

At the mechanical level, the new range of models is based on the modular platform for electric propulsion (MEB) of the Volkswagen Group. The two versions of the ID. Buzz have a high voltage lithium ion battery that provides a gross energy content of 82 kWh (net: 77 kWh). The battery is powering a 150 kW electric motor (204 PS)integrated in the rear axle, to which it gives movement.
The final speed is electronically limited to 145 km / h. Official data on autonomy are not yet available yet is expected to exceed 400 km.

The ID. Buzz will offer plenty of space, either as a passenger, with both two and three rows of seats, or as a van. As a member of the ID model family, it will be able to receive “over-the-air” software updates while through the “Plug & Charge” feature will be able to charge on public fast chargers with the whole process of verifying the identity of the vehicle and the exchange of the necessary data to be done automatically, through the charging cable. At the same time, there will be a possibility of two-way charging, ie return of energy to the electricity network, if this is possible by the provider.

The production of ID. Buzz starts in the first half of this year, with its release in Europe in the fall. The model will be released in the US. – will be the return of the legendary Bulli to the American continent, with millions of fans from New York to San Francisco.

The ID. Buzz by the way is not the first Bulli with electric drive system. Fifty years ago, at the Hanover Trade Fair, Volkswagen was already presenting a T2 as a prototype which was driven by an electric motor mounted on the rear.

The maximum range of 85 km at the time, however, showed that the battery technology was far from suitable for practical use. Of course, as far back as 1972 the goal for a Bulli without pollutants, showed that it would be realistic in the future. In 2022, it is now becoming a reality.

Her "invasion". Geely in the global automotive industry continues, with the Chinese giant announcing on Friday (30/9) the acquisition of...

This €3million motorhome offers the same bed as the Windsors

The nightmare for illegal parking is Turkish (+ video) - Carneg.com