She snowboards with a Bugatti Chiron 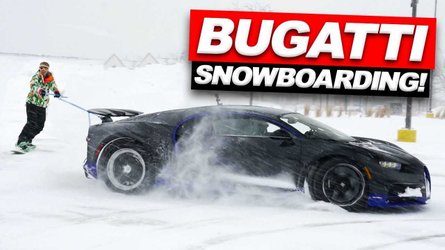 The Bugatti Chiron is a hypercar produced in a limited series of 500 copies. With its 1500 hp W16 engine, it crushes the competition on the asphalt thanks to its demonic acceleration and delirious top speed.

The owners of the Bugatti Chiron know that their car is a rarity, moreover, the examples delivered to customers undoubtedly spend most of their time in a warm garage than on the roads. However, some hotheads do not hear it with the same ear. For them, a Bugatti should drive and provide maximum pleasure.

There are those who take it on the autobahn to drive at more than 400 km/h and there are those who prefer to use it for another discipline. Steve – the owner – and Tommy from the YouTube channel “The Hamilton Collection” had a brilliant idea: attach two ropes to the base of the Chiron’s fin to allow their friend Natalia to snowboard. Neither one nor two, the Bugatti Chiron was driving at low speed on the snowy roads of Chicago towing Natalia and her snowboard.

The scene is completely crazy, in fact, even passers-by stopped for a few moments to see the Molsheim hypercar with unsuitable tires slipping and pulling the young snowboarder. It doesn’t happen every day, so take advantage of it.

On his website, Steve shows his entire collection, and the least we can do is that he is spoiled for choice to have fun every day. In addition to the Bugatti Chiron, he is the proud owner of a McLaren Senna, Lamborghini Aventador, McLaren P1, Porsche 918 Spyder, Pagani Huayraetc.

He explains in his biography that he grew up in a family that lived on social assistance, that he worked throughout his adolescence and that his entrepreneurial spirit allowed him to get by and live the life of dream that he shares through his passion for cars.

“These cars aren’t trophies to me. They’re vehicles, and they’re meant to be driven. So we’re going to have fun along the way, too!”

Ukrainian crisis - What are the risks for motorists?