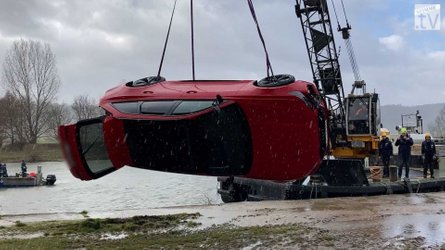 Driving a luxury car involves the utmost care. Unfortunately, despite all the goodwill in the world, things don’t always go as planned. And this German driver of 37 years will not say the opposite, he who saw his car fall into the water before sinking.

The scene unfolded Sunday February 13 at 9:15 p.m. in Germany, in the Neckar river in Gundelsheim, near Stuttgart. A red Audi RS 6 Avant ended up at the bottom of the water for a rather strange reason. Stimme TV reports that the driver of the Audi stopped briefly at a boat launch to relieve himself.

The pee break over, the driver got back in his car to get back on the road, but not everything went as planned. He made a driving error that drove him straight into the river. German media report that the driver actually mixed things up, engaging forward gear instead of reverse gear and vice versa. It could cost him dearly.

Still, the Audi RS 6 Avant began to float, before sinking to the bottom of the Neckar. The man was able to get out of his vehicle through the sunroof, but he is in shock and suffered from hypothermia.

A witness to the scene called the emergency services, which took several days to get the car out of the water. Raised to the surface on Thursday, February 17, the Stimme TV video shows an Audi RS 6 Avant not in great shape. The police estimate that the amount of repairs amounts to over €100,000not sure that the driver and his insurance undertake the repair of the machine sold new in Germany from 127,000 €.

We share the driver’s pain, it’s also a reminder for all of us, especially during tricky maneuvers like near water.

How much does Bugatti charge extra? - Carneg.com

The next Bugatti will be hybrid and will abandon the W16

This is the absolute solution to electric fires - Carneg.com