On the big screen of the world market, SUVs are the “project” that has gathered all the tickets. THE Skoda but with Octavia Scout insists on addressing a more cinephile car audience. And it does very well.

Let’s say we are not dealing with a car show but with a multiplex cinema. An overproduction of those that fill the halls is played in one room and sighs the popcorn. And right next door, much quieter, is a Golden Palm festival, one of the films for suspects, with cinephile spectators measured on the fingers.

Take a picture of a Skoda show. On the one hand the lights, the glow, the special effects and the crowds on the big screen of SUVs. And somewhere in the background, if there is space, something different, lower tones and cool, with an emphasis on the good car scenario and the nice industrial plot.

This car at the back of the room is the Octavia Scout you see in our test. An old “glue” of hers Skoda with station wagons, which continues to evolve to this day. And where in spite of the times and SUVs it manages to survive prosperously. In fact, having in some more mature markets and a fanatical audience. 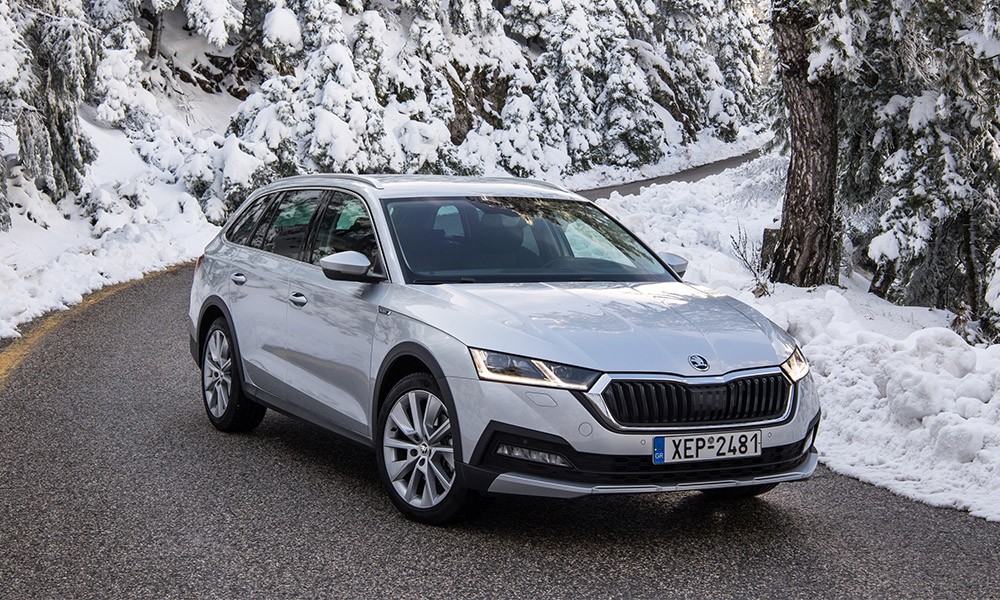 This case is a little more special. Mainly because various protagonists of the VW group participate here as guest stars, such as the two-liter diesel with 200 horsepower, the four-wheel drive but also the Scout indication which brings echoes from the great Allroad school of Audi.

In practice we have another version of the new Octavia, which up to the middle pillar remains the same and unchanged as the normal version of the car, modernized, more beautiful and more stylistically informed than ever. 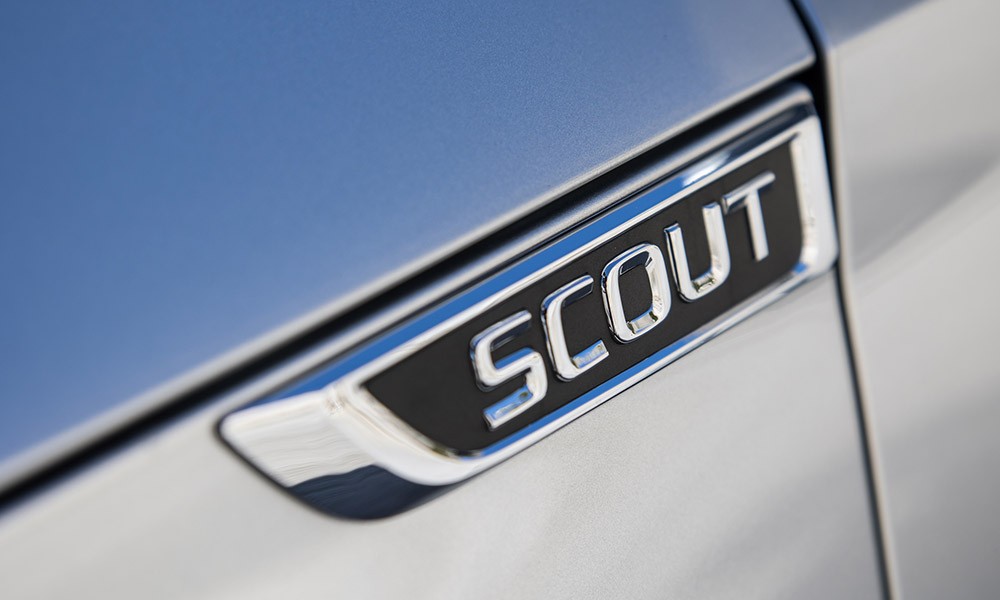 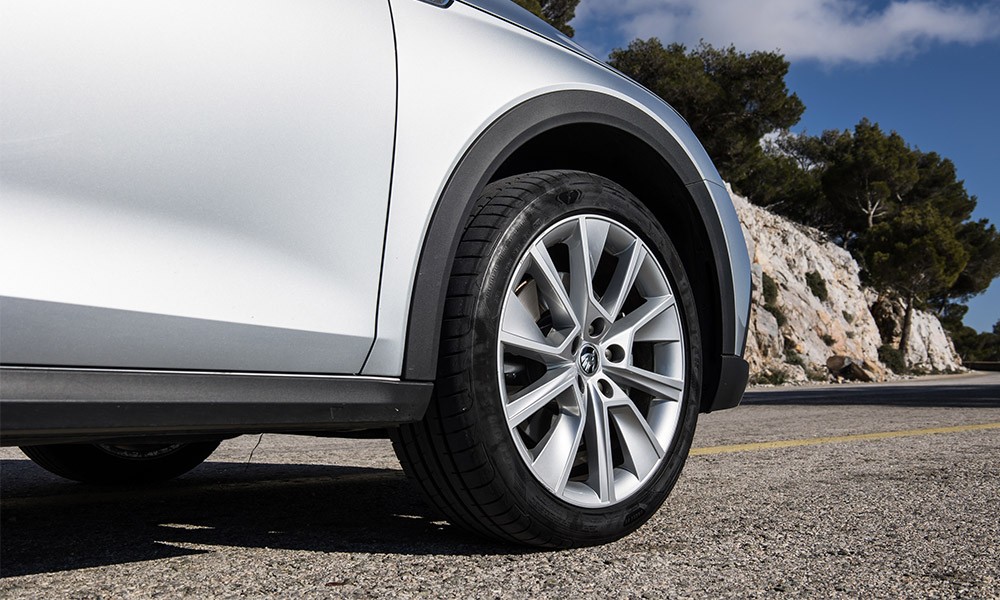 For the specific case with the Scout label and to justify the most adventurous thing, there are some aesthetic interventions around the body, elegant and quite discreet protective aprons, and of course increasing the distance from the ground to 16.1 cm.

In its station wagon version Octavia a third volume has been incorporated in the back in a very balanced and beautiful way, completing a set that is impressive with its numerical sizes (length at 4.7 meters), but it clearly looks smaller and more friendly to the eye than it really is. 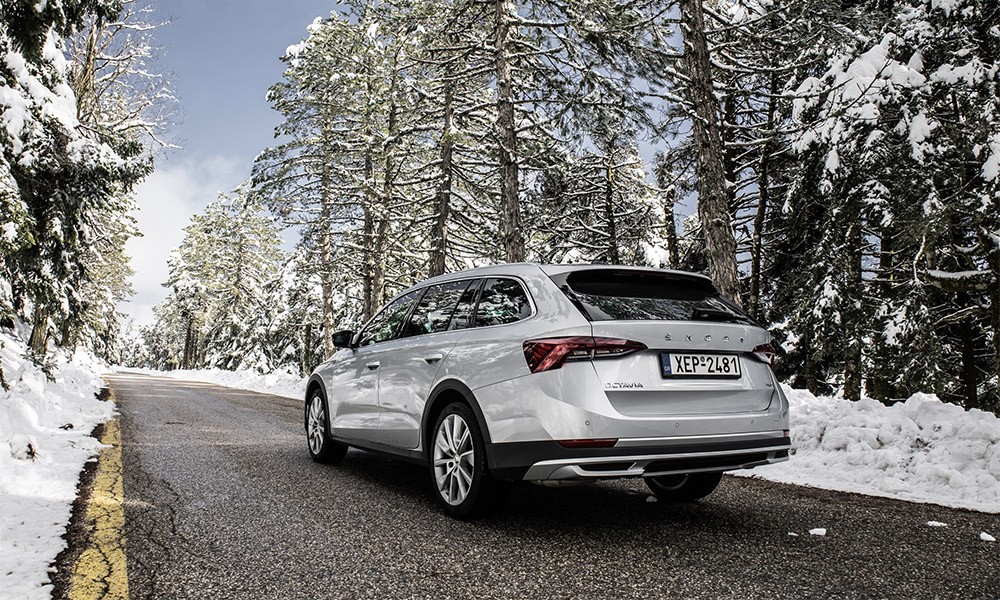 The existence of the third volume ensures unique spaces for luggage, with the vast trunk reaching 640 liters in its normal configuration or up to 1,700 liters with folding rear seats. And to need a forklift if someone makes the “mistake” to fully load it and want to “dig” from its depths an object that… was lost there.

At the same time the large wheelbase of 2,678 meters creates a 5 × 5 pitch for passengerswith small simply clever amenities, several convenient solutions for small things and many modern facilities such as USB ports for all parent and child mobile phones (especially the latter). 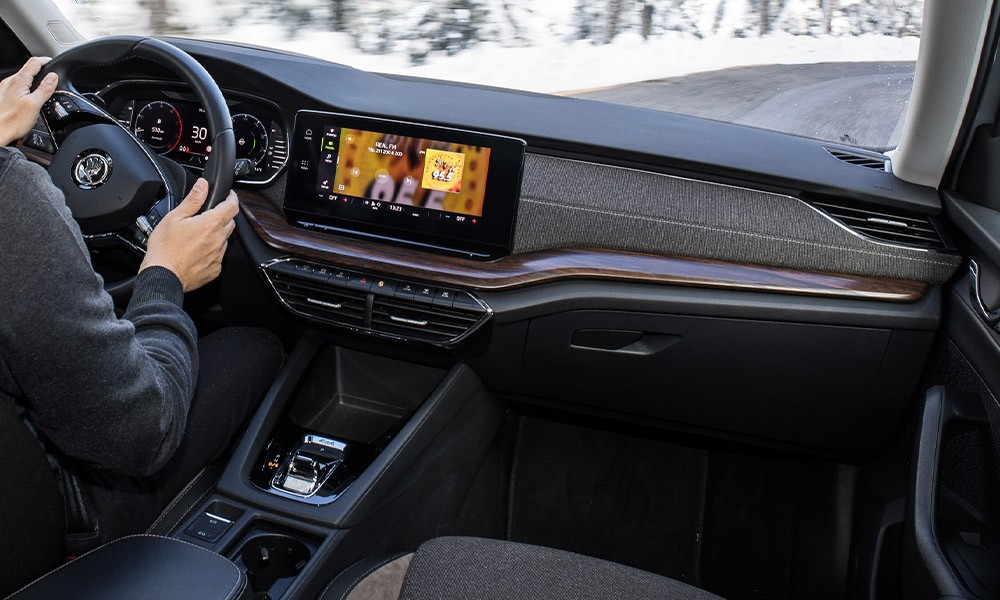 The saloon remains a great moment in the continuous and unparalleled evolution of Skoda. Especially our test car, as you can see from the photos, in addition to the top quality and impeccable ergonomics, also has plenty of style.

Style that results thanks to the very beautiful upholstery of “fabric” and wood in the dashboard and the Excellent design and aesthetic seats in earthy colors and with a special coating called Thermoflux so that the driver’s back does not sweat. 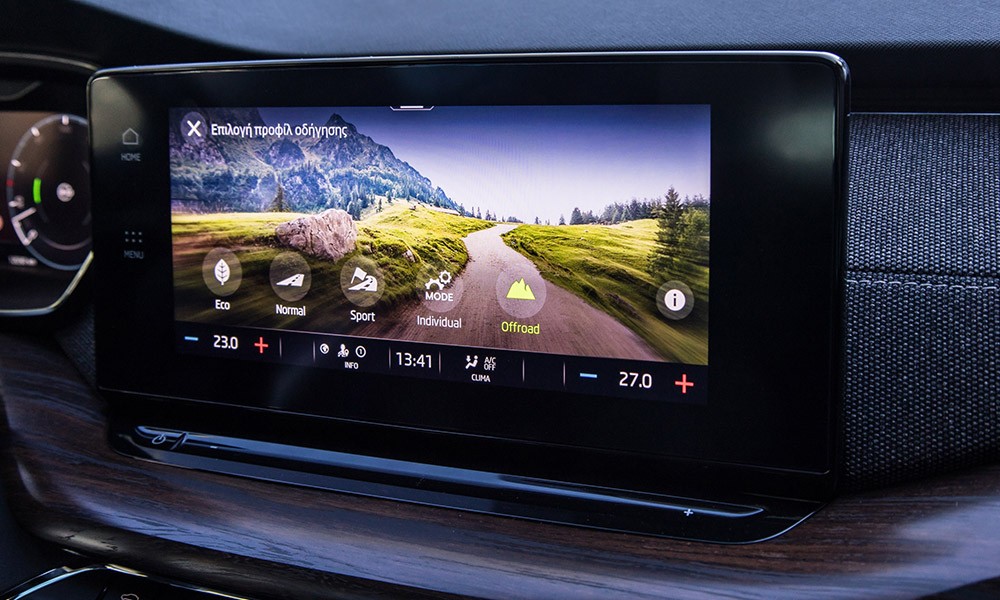 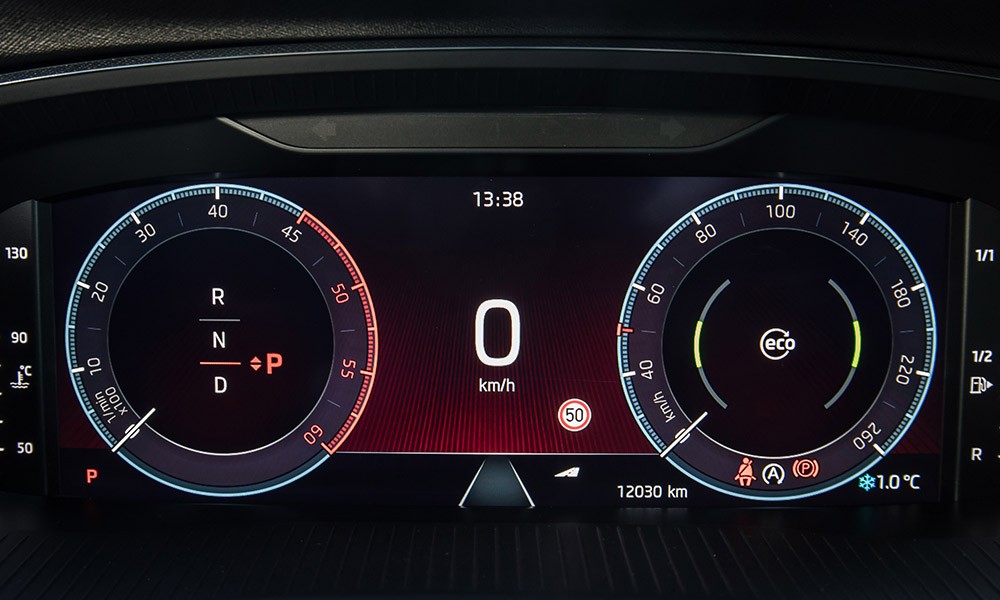 The impressive digital showcase with the two screens on the instrument panel and the multimedia system, not only stays in type but also has enough depth in interconnection and entertainment technologies.

At the same time, this version with the two-liter engine is equipped with the entire technological universe of the VW group for driver assistancehaving all the systems that are now taken for granted in a car of this price. 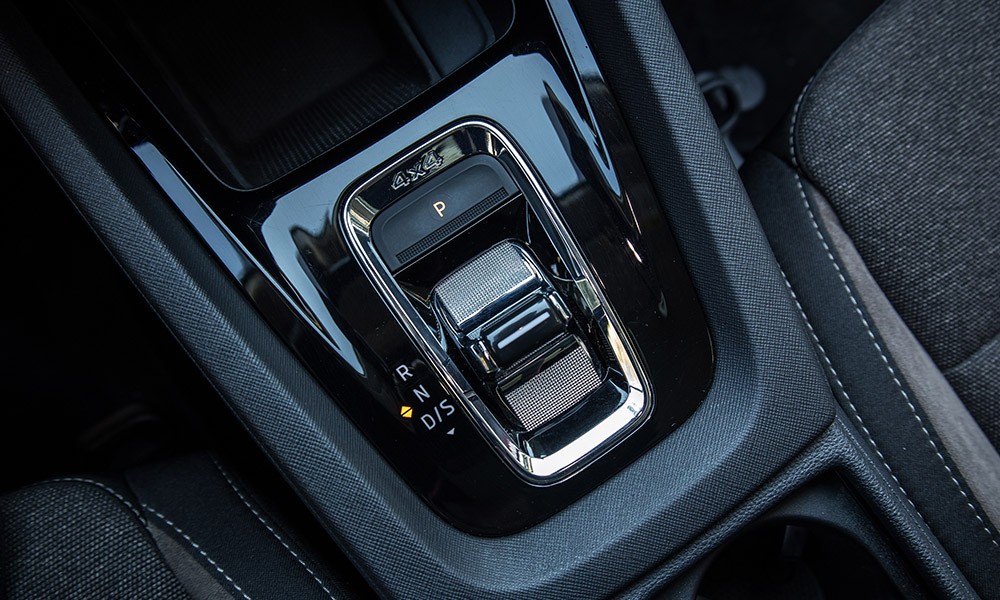 On the road, the Octavia Scout is a pleasant driving experience where a zen atmosphere and an air of restrained luxury prevail. Substantial differences from the “simple” Octavia will not be visible in 90% of cases and only the slightly increased travel of the suspension will leave a feeling of slightly more toned body movementsalthough many will take it as an extra comfort bonus from the Scout philosophy.

From now on the two-liter engine confirms in another car of the group its huge dynamics, being civilized and quiet for a diesel engine, with plenty of appetite at low and medium revs, and excellent collaboration with the seven DSG, which also has paddles for cases where downloads to economical drivers take a while. 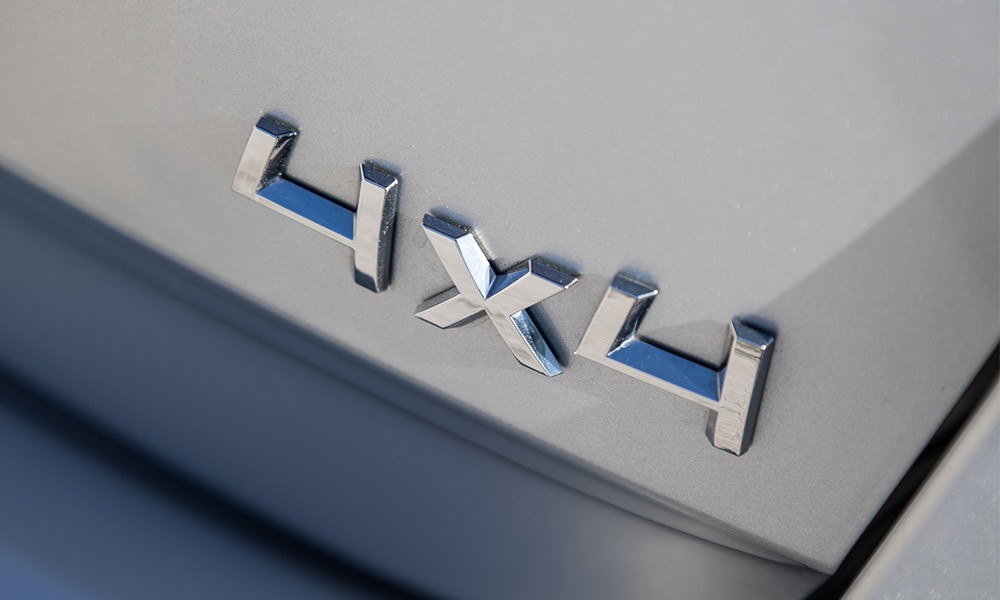 Thanks to the effortless efficiency of power, it creates the conditions for long journeys in an atmosphere of relaxation and safety. While it also proved to be impressive in terms of fuel economy, approaching even 6 liters / 100 km on a national trip (we saw even lower on a very relaxed Sunday walk), while an average price is just over 7 liters / 100 km, especially if one exhausts its great potential in cargo. 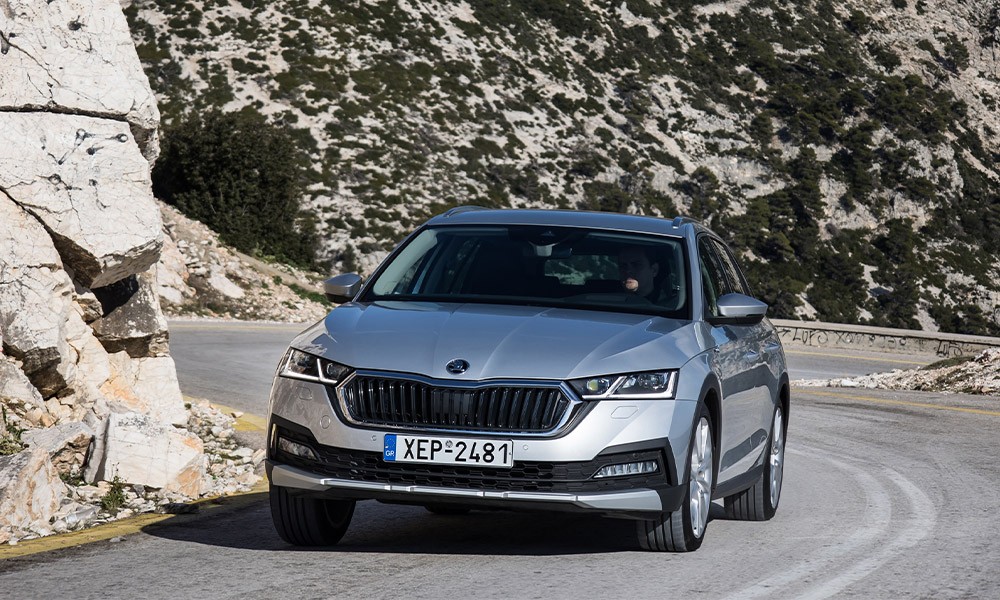 As for the off-road escape, the Octavia Scout is more capable than its specifications showwith the latest state-of-the-art four-wheel drive (with two coaxial liquid multi-disc clutches in parallel operation) to do its job even in many situations where “purebred” SUVs would stay without even trying.

By choosing the corresponding off-road driving program, ESP and ABS are “released” as needed for more immediate reactions to the constant traction changes. While a hill descent system is added to the arsenal along with some hardcore graphics on the screen (compass, inclinometer, altitude etc.).

Beyond that, of course the limits are set by the asphalt tires but also the restrained off road corners, something expected based on the large dimensions of the body, which require prudence and foresight from the driver so as not to get involved in alleys without return. 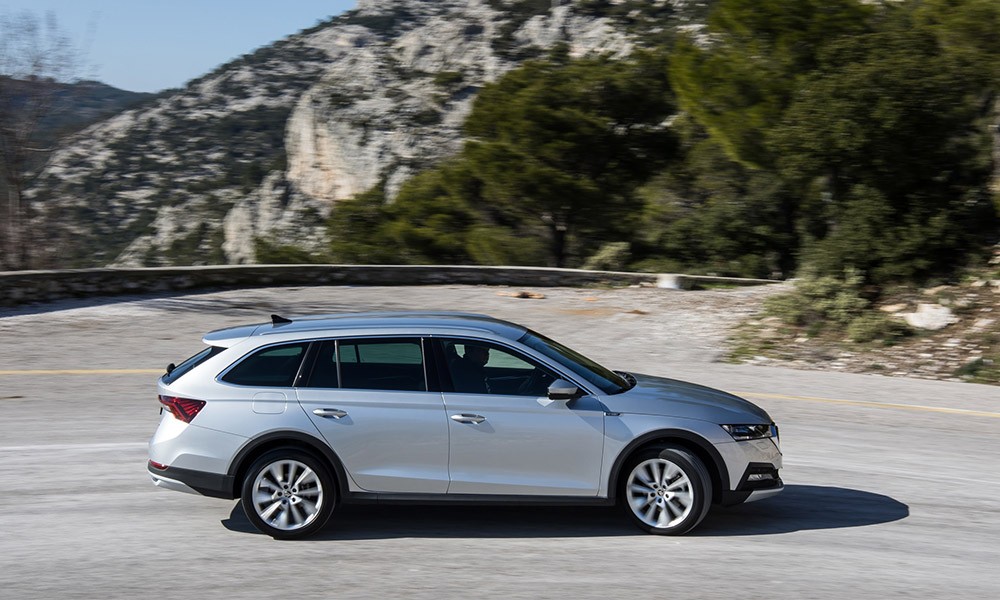 In summary, things are rather simple. If you belong to the audience that likes blockbusters and you blindly follow the fashion blockbusters, then you will definitely only have eyes for one SUV for that money. And you are probably reading these lines just to confirm your decision, having already cut the ticket for the main market hall.

On the other hand, if you are one of the most sought after and estheteand you do not want to follow the trends but insist on your own view of things, then you are probably in front of a car that will win you over each of its 4,700 well-designed body points.

It has everything you expect in this size (spaces, amenities, quality, and other spaces…), It is well made and richly equipped, inconceivably economical for 200 horses and ready to travel endless hours on asphalt and dirt without feeling the slightest sign of fatigue or boredom. A car-definition of the family who does everything and does almost everything well, but always in his own way. 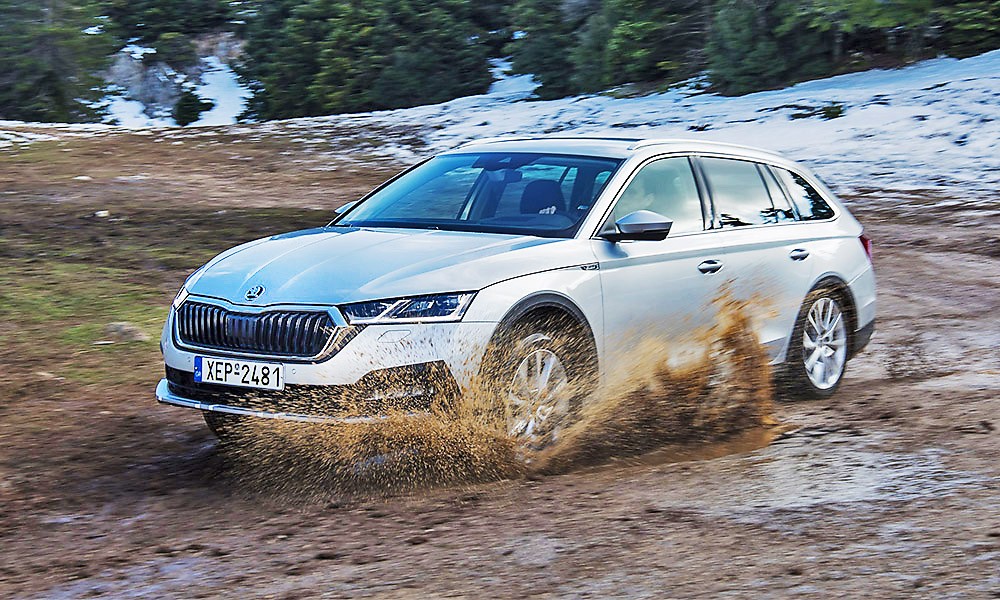 It costs a lot is the truth. And the 42,100 euros are hard to take out today to touch the aesthetics of a stylish station wagon, even four-wheel drive and with off road alibi. But, we said, this is something like an art cinema, for the few and the select. And above all connoisseurs of the genre. Car cinephiles will find in the Skoda Octavia Scout a constant value of life. And they will probably do much better than the noisy SUV room.

READ ALSO:
The new Skoda Fabia at the Golden Hall
Thoughts for pure electric Skoda Octavia
Skoda Octavia: How it all started (+ video)

Full of news. March Turbo Magazine is now on newsstands!

Volkswagen revealed the premiere date of the new cheap sedan