Rich problem, he can finally buy his LaFerrari Aperta! 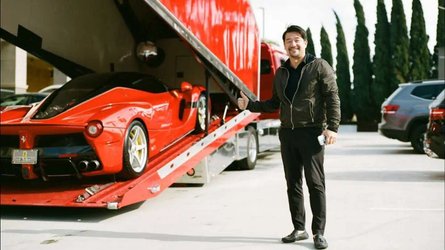 It is not enough to have a lot of money to buy the supercar of your dreams. David Leeboss of Hing Wa Lee Group (store specializing in the sale of luxury watches) and real estate magnate has had bitter experience of this.

At the 2016 Paris World Championships, Ferrari presented the LaFerrari Aperta which was to be produced at only 200 copies. The brand’s policy is that its most loyal customers can buy this model before all the others. Thus during its presentation at the Paris show, the 200 units planned were already pre-reserved well before the revelation to the public of the racing car at nearly two million euros excluding taxes.

David Lee is a very good customer of the prancing horse brand. In his garage, there are more than a dozen Ferraris. If you want to know more, we invite you to browse his Instagram account to realize the extent of his garage. As you will discover, he not only owns Ferraris, but he also owns Porsches and McLarens.

The man with 1.1 million subscribers on Instagram has the perfect profile to afford a new copy of the LaFerrari Aperta. However, a dispute will lead Ferrari to refuse him the supercar of more than 900 hp which he explains today and in detail through a video published on YouTube (and which you will find at the beginning of the article).

He says that in 2017, he spoke for an hour with a journalist from the Los Angeles Times. The article was intended to allow readers of the newspaper and the website to get to know David Lee better and to step into the shoes of a Ferrari VIP customer. Bad luck, to boost audiences, Lee explains that the editor changed the subject to generate more sales by creating more sensationalism.

At the question : “Did Ferrari allow you to buy the LaFerrari Aperta?”David Lee answered in all honesty in the negative because his dealer was still in talks with Maranello so that his client could obtain a copy of this exceptional machine. LA Times then headlined : “He owns a dozen Ferraris and has a lot of money: Why can’t he afford a $2.2 million LaFerrari Aperta?”.

The Italian manufacturer did not like this article. Officials believed David Lee was trying to use the media to pressure them into getting a LaFerrari Aperta. Sad and displeased, Lee finally got a meeting at Pebble Beach to talk to Ferrari executives and set the record straight. All’s well that ends well, five years later David Lee received his much desired car.

This Honda NSX is different - Carneg.com

How much does Bugatti charge extra? - Carneg.com