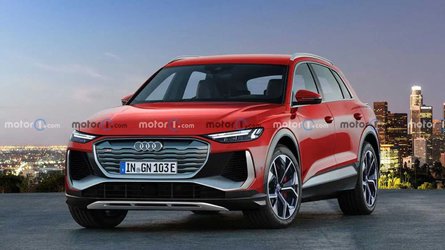 It’s no secret that Audi actually still sees room for a third crossover between the Q4 e-tron and the big e-tron. In all likelihood, it will be called the Q6 e-tron and could make its debut at the end of the year. Now there are new developments that point to a high-performance variant of the e-SUV.

In a new report, the Spanish magazine wants Motor.es have revealed a document according to which Audi has had the name RS Q6 protected. That would mean that the Ingolstadt-based company is planning its first high-performance electric SUV. A new rendering now shows what the possible Über-Q6 could look like if Audi seriously pursues the plan.

The image is based on recent spy shots of the regular Q6 e-tron (seen in the gallery below this post) in combination with design elements from other Audi RS models. The large air intakes, for example, are reminiscent of the RS 6 and RS 7. We also see a closed grille, albeit significantly smaller than on the RS combustion models. The rendering dispenses with the two-piece headlight solution of the prototypes viewed so far.

We have also had to do without an idea for the rear design so far. Still, it’s interesting to see what an electric RS crossover might look like.

However, before you get your hopes too high, it should be said: the fact that a model name is protected does not mean that this model will be built in the foreseeable future. But the step is always exciting. We will definitely be keeping an eye on further developments on this matter over the coming months. If you were to go in the direction of the RS e-tron GT, the RS Q6 could deliver around 600 hp and 830 Nm of torque.

Like the standard Q6, it would utilize the PPE (Premium Platform Electric) architecture. This platform will be seen in various other Group products in the future – including the electric Porsche Macan and the Audi A6 e-tron.