Is it the Dodge Hornet, clone of the Alfa Romeo Tonale? 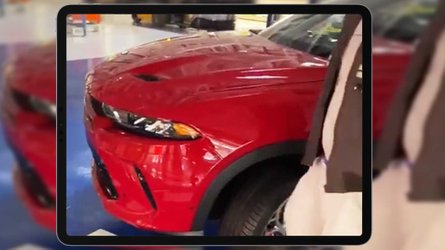 The all-new Alfa Romeo Tonale was only recently revealed, on February 8 to be exact. Rumors of a new small Dodge crossover called Hornet first surfaced in June 2021. The last time we heard of the Hornet was in August, when new rumors claimed it would be built alongside the Tonale.

Today, photos allegedly show the Hornet out in the open. If these images indeed depict Dodge’s new small SUV, there could be more than just a common platform underneath. A video posted to an Alfa Romeo Facebook group claimed to show footage of the Alfa factory in Pomigliano d’Arco. The video is no longer available, but a few screenshots have survived in the forums. Autopareri.com and were eventually shared on social media.

An image shows the front of a red SUV resembling the new Tonale. The hood is different, and ithere are changes to the front fascia and headlights, but the proportions seem to match. There is no need to worry about a change of hood and headlights on an identical platform.

The second image shows the interior, and that’s where things get a little more interesting. Parts of the dashboard are still hidden, but what’s visible is much the same as the layout of the Tonale. The center console and center stack are identical, as is the steering wheel, but with one notable exception: the Dodge badge which replaces the Alfa Romeo crest on the airbag.

We previously reported that the Hornet would likely share the Tonale’s plug-in hybrid platform and system. Rumor has it that a 2-liter turbocharged engine is on the way for Dodge, but we haven’t heard anything about other possible combinations or finishes, such as an RT version. Given the similarities seen here, it’s no exaggeration to say that the Tonale and Hornet could be true clones, with Dodge aiming for low-cost competition against the Alfa’s luxury clientele.

With the Tonale now official, we should see the Hornet later this year.

Voge, Loncin's luxury export wing, already has a range of bikes bearing the DS logo, from the 300 and 500...

Volkswagen revealed the appearance of the new pickup Amarok