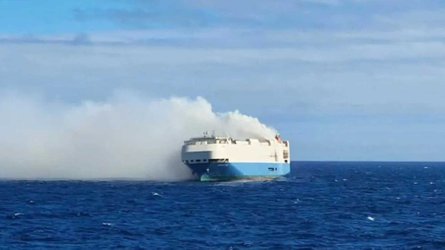 The story repeats itself. On Wednesday, February 16, 2022, a freighter carrying Porsches and other Volkswagen Group cars caught fire near the Azores Islands. he had left the port of Emden, in Germany, on February 10 and was due to reach Davisville (Rhode Island) on February 23.

According to information from the Washigton Post, this ship transmitted a distress signal after a fire broke out in one of the loading decks. A short time later, a Portuguese navy patrol boat came to its aid in order to evacuate the crew members. In a press releasethe Portuguese Navy confirmed this information, while specifying that all 22 people on board the vessel had been rescued and are safe.

According to The Drive, the Felicity Ace has in the past transported thousands of cars on behalf of the Volkswagen Group. Audi and Lamborghini are his customers, but this time he was transporting Porsches as well as other models from the German group.

Thanks to Porsche’s “Track Your Dream” tool, customers can follow the progress of the production and delivery of their car. Members of the 718forum.com reported that this service displayed the following message:

Our thoughts go first to the 22 crew members of the merchant ship “Felicity Ace”, who we understand are safe and sound after being rescued by the Portuguese Navy following a fire on board.

We believe that a number of our cars are part of the cargo on board the ship. We are in close contact with the shipping company and will provide you with further information in due course.

Anyone affected by the consequences of this incident on a car they have ordered should stay in contact with the dealer from whom they placed their order. As additional information becomes available, our dealers will contact all affected customers to discuss next steps.

Built in 2005, the Felicity Ace is 200 meters long and 31 meters wide. This vessel is capable of loading up to 4000 vehicles. For the moment, we do not know if the vehicles on board were affected or spared by the fire. We also do not know the exact identity of the models, it is hoped that no rare and limited production Porsches are burned.

We remember that in 2019, the Grande America ship ran aground off La Rochelle taking with it 2,100 vehicles including Porsche Cayennes, 718 Caymans and Boxsters, as well as Porsche 911 GT2 RSs. The Italian ship also contained Audi RS 4 and RS 5.

Video: review of the most secret, expensive and protected car from Russia - Laboratory

Everything is changing in West Attica - No more traffic jams - Carneg.com