The Skoda Kodiaq is not the car that will be able to fill its vast interior with plenty of impressions that it will cause at “first glance”. Nor is it a vehicle that will star in the compiled list of candidate models for purchase. And this is a disadvantage. Not for the model itself, but for the one who thinks he has reasons not to do so.

Its most modern form

The redesign of the Kodiaq was the opportunity to highlight – first – some of its aesthetic elements which until then were “lost” in its general form. This, by definition, was what we call dynamic and intense and could not be otherwise.

In 2016, the crossover / SUV model took the place of the Yeti within Skoda, which had left its own – quite strong – mark in the recent history of the Czech company and the specific category in general.

Then, about six years ago, the Kodiaq would emerge as the “succession state” of all of Skoda’s manufacturing values. Large in size, incomparably spacious inside, simple and practical, addressed to those who needed a vehicle with these features, which is not devoid of modern technological solutions and is affordable.

This was the beginning, followed by Karoq and Kamiq, as its “representatives” in the smaller vehicle dimensions of the class. But Kodiaq kept it that way its oversight role and the specific weight it had in the range of the company’s models. Its executives decided to reform it in the context of the periodic, practical renewal that concerns each new model.

So the redesigned Kodiaq has more vertically mounted mask compared to before which has a different, hexagonal frame, has smaller height LED headlights, remodeled frame for fog lamps and redesigned bumpers. Also, the hood and domes are raised, compared to what was the case until now.

At the rear, both the bumper, which incorporates an aerodynamic diffuser, and the lights have been redesigned. The latter are also thinner, have full LED technology from the basic version of the model, while from the middle equipment version and above the flashes work with motion effects. Finally, the small spoiler at the top of the body has been remodeled.

With these changes, Kodiaq became more elegant aesthetically but without losing the dynamism of its character. Let’s not forget that it is an SUV, a designation that truly meets its concept, as in this case it has a four-wheel drive system.

Inside, the main differences are the possibility of being available with new wallpapers, with the new design and configuration of the steering wheel adopted by Skoda in other recent models and with the addition of decorative stripes on the dashboard.

The diesel engine with which the redesigned Kodiaq is available is the 2.0 TDI EVO which the company’s technicians have improved compared to before. As they state, the emission of nitrogen oxides has decreased by 80%, compared.

To achieve this, the exhaust system has two catalysts for the selective (catalytic) reduction process (SCR) and – of course – urea solution (“AdBlue”) “Two points” (ie, one in the “DPF” microparticle retention filter and one in the second catalyst).

In addition to the effort to reduce nitrogen oxides, the diesel engine has been upgraded in terms of reducing fuel consumption, and therefore the emission of other pollutants and carbon dioxide, compared to before. Thus, it has a lighter crankshaft, reduced friction and lower temperature and a more accurate fuel injection system.

Whenever necessary, the driver should keep in mind that he has to drive a relatively large vehicle and take care accordingly. Fortunately, the sensors that exist around the perimeter – in our case – inform you in time about the approach to a fixed object, both audio and graphic.

The automatic four-wheel drive system is hers Haldex (fifth generation) in which an electro-hydraulic multi-disc clutch transmits torque to the rear wheels whenever required by road traction conditions or ground slope.

The dual-clutch automatic transmission it is very smooth in relationship changes (either “uploading” or “downloading”) but relatively slow in some cases you want a more immediate acceleration. The traffic noise level is relatively low. He from the engine does not bother, while he (aerodynamic) during the trip is small.

In the second case, the gearbox also plays an essential role, as the “long” escalation of the sixth and especially of the seventh gear allows relatively quiet movement. For example, at 120 km / h the engine spins at about 1,800 rpm, that is, very low and within the useful torque.

His post it is relatively tight, although its shock absorbers and springs are relatively high. At the front, it consists of MacPherson struts with base scissor and anti-roll bar, while at the rear there is a multi-link arrangement and anti-roll bar.

Its setting allows it to oscillate as the vehicle passes at low speed due to imperfections on the road or from an uneven surface off it but absorbs the oscillations satisfactorily when the speed is increased (on the road, of course). Finally, in terms of average fuel consumption, we measured 8.2 l / 100 km, price which is satisfactory for the weight of the vehicle.

The redesigned Skoda Kodiaq seems to be one of the most attractive vehicles one can get, as it does not compromise on spaciousness and practicality. It is technologically modern, with good quality construction and in this version offers the convenience of the automatic transmission with the possibility of four-wheel drive and fuel economy.

Of course, the price of that version starts at 39,200 euros which is a respectable amount in each case. But in order to find a similar “package” in another company, one has to pay more money, which is usually not left over. 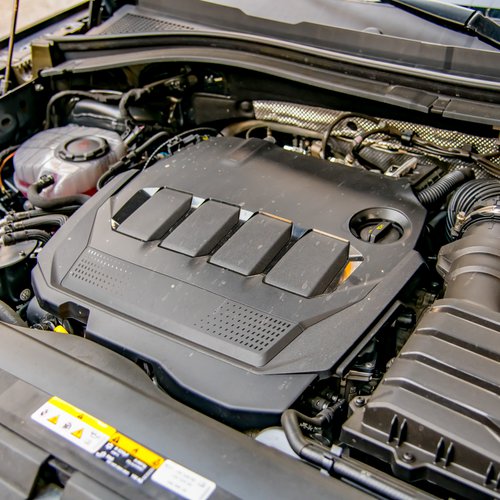 FOR SPACE, FUEL CONSUMPTION, IMPROVED APPEARANCE FROM BEFORE, BEST QUALITY OF CONSTRUCTION, EQUIPMENT.

The completely renovated Ferrari Dino 246 GT is a doll - Carneg.com

Which company makes the best cars?