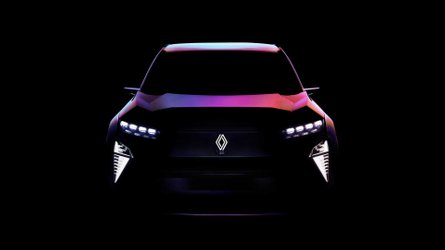 Renault seems to be committed to electric vehicles and has announced big plans to expand its product range. They even have their own name for it: “RenaulutionHowever, to follow in the footsteps of automakers like Toyota, Renault is also exploring other options. One could be to launch internal combustion vehicles that run on hydrogen.

We’re not exactly sure if that’s what Renault hinted at with the latest teaser, but the press materials clearly state that the vehicle will have a “hydrogen engine” has. There is no talk of a fuel cell. In the exact words of the automaker, this is …

An unprecedented hydrogen-powered concept vehicle that embodies the decarbonization journey of the Group and the Renault brand, as well as its advances in the circular economy and in recycled and recyclable materials.
To date, Renault has never expressed any plan or intention to use hydrogen combustion to power its future vehicles.

As per the press release excerpt above, the manufacturer claims that this is better than burning fossil fuels and that it is a viable way to save the environment.

The manufacturer does not say directly what the premiere of this concept will mean in the future. Are we seeing the arrival of a production hydrogen-burning model here? Based on the wording in the press release alone, we assume that Renault is going in this direction with this concept. But at the moment it is probably still in the test phase.

Visually, the front of the design study is definitely similar to the new all-electric Megané. The vehicle also appears to be a crossover. Cameras instead of mirrors can also be identified. It is not yet known when the study will be officially presented, but it will probably happen later this year at a major motor show.

This is the most special Audi RS5 (+ video) - Carneg.com