Futuristic in design, with innovative technologies and an innovative electric background the new Audi Q4 e-tron comes to be the top proposal on the market for a compact electric premium SUV.

With an impressive design, advanced technologies, for the safety and interconnection of passengers, with plenty of space and excellent performance combined with the sporty feel that characterizes every Audi car, Audi’s two new electric compact SUVs come to offer the unique thrills of electric propulsion with zero pollutants and a whole new sense of driving pleasure.

The clean design of the body in the new Q4 e-tron brings the future of the car to our days, creating a dynamic but also full of style shape, with strong premium features and very beautiful details. The impressive “closed” mask creates a very imposing vehicle which is imposed by its presence on the road, highlighting in the best way its electrical condition. 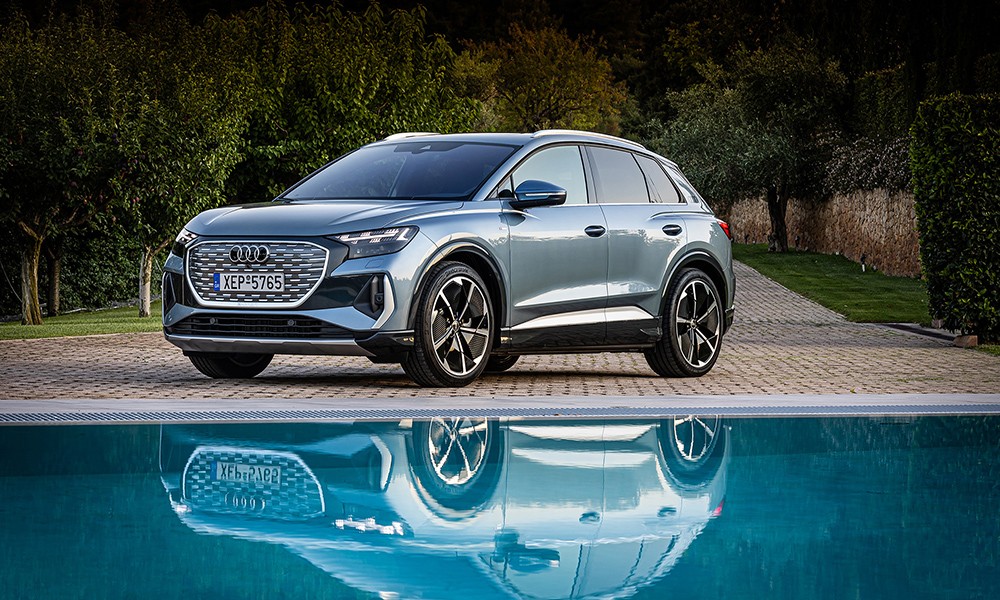 Balanced and stylish proportions with short front headlights, large wheels and clean side lines, compose a very modern and attractive vehicle that emphasizes to the maximum the unique character and quality of Audi.

Version Q4 Sportback e-tron adds an extra element of sporty dynamism, with the particularly low roofline ending in a very sporty rear end, which is also equipped with a spoiler and very impressive lighting fixtures .. 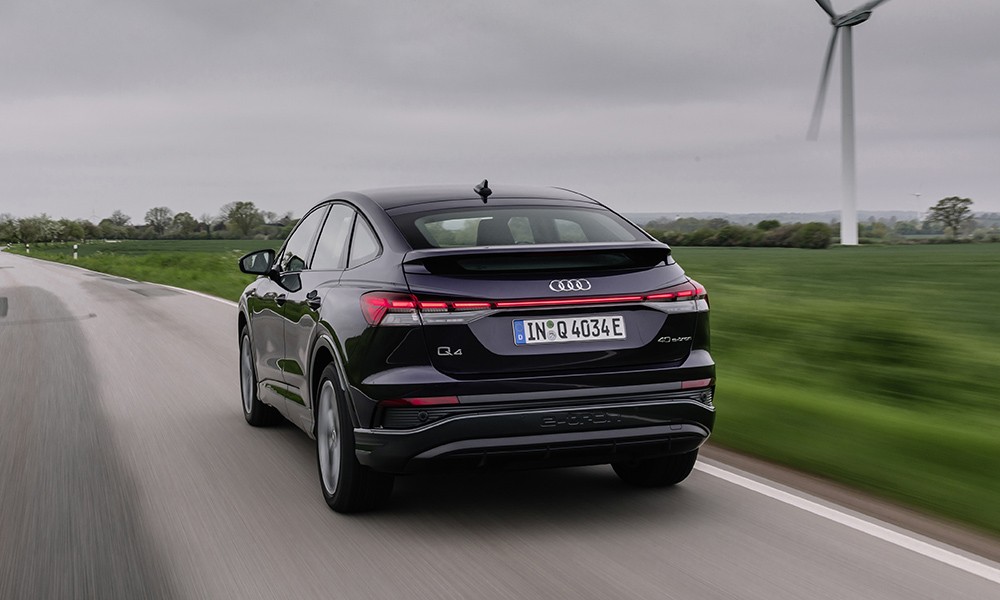 Apart from its aesthetic superiority, the body is also very aerodynamic, with the Q4 e-tron having a drag coefficient of Cd 028 and the Sportback dropping even lower to Cd 0.26.

Another element that emphasizes the futuristic character of the young Q4 e-tron is the Matrix LED technology floodlights. This is a highly advanced lighting system for better visibility on the road without disturbing other drivers.

In fact the driver of the Q4 e-tron can choose between four lighting signatures through the MMI, with the front and rear headlights creating different patterns depending on the conditions. 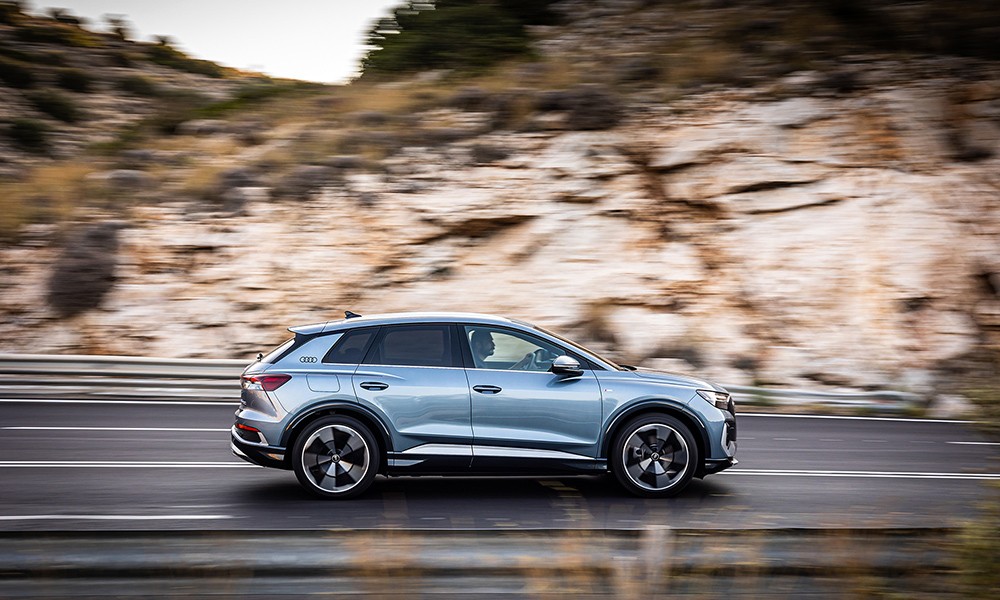 The progressive in design and top luxury showroom of the new Audi Q4 e-tron is characterized by its technological innovations, the sporty aura and impeccable functionality in every part of it.

A typical example is the new generation steering wheel, which combines unique style and high practicality. The upper spokes of the sports leather steering wheel are equipped with touch surfaces, in black-panel view, with backlight and functions related to modern car systems. 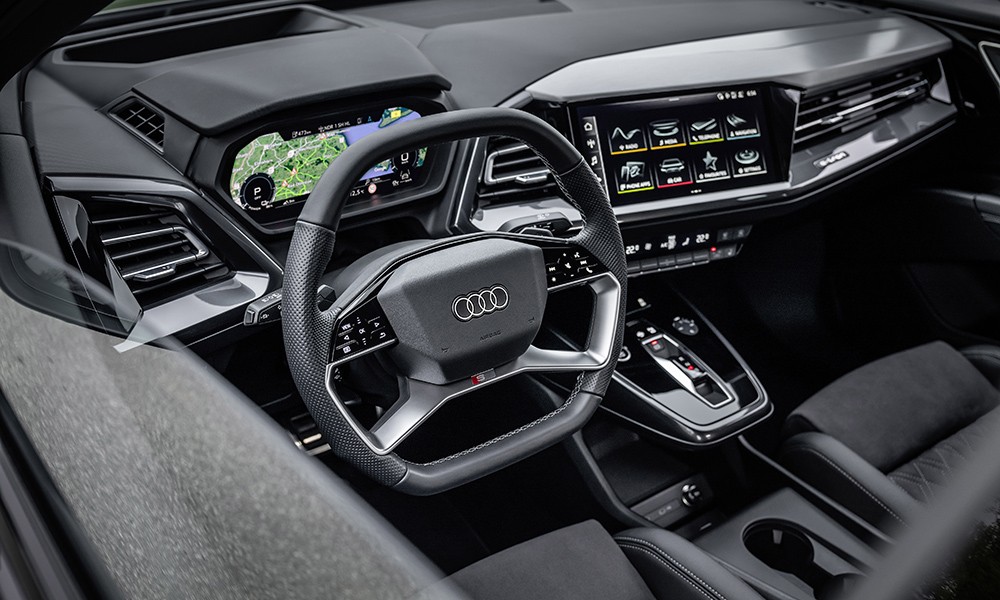 These buttons have light tabs that separate the functions and make it very easy and simple to use by the driver thanks to the gentle tactile feedback when pressed.

It is also worth noting that they have functions similar to smartphones as well there are not only touch gestures but also scan gestures, to browse multimedia system lists and menus. 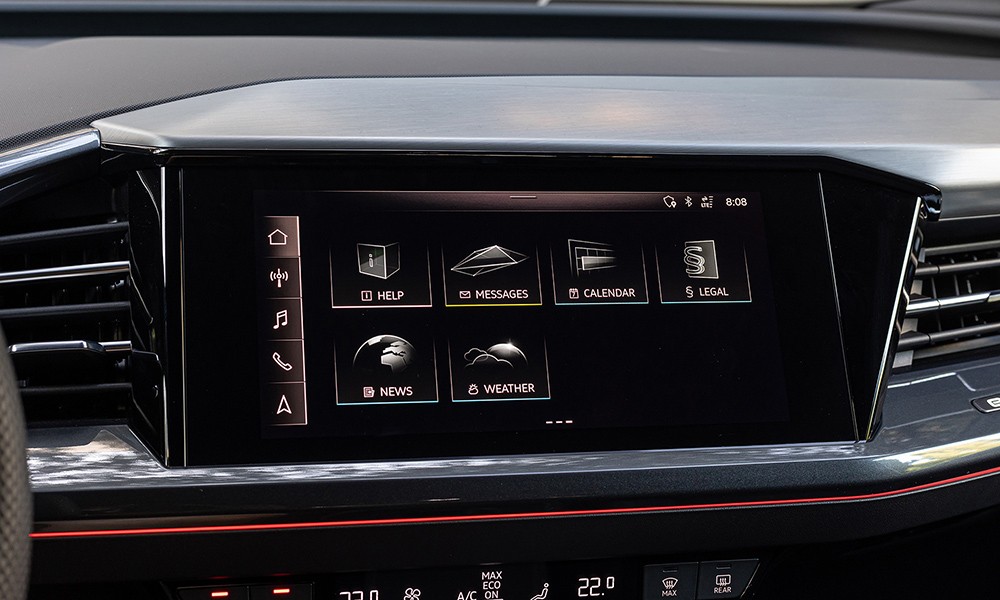 The interior of the new Q4 e-tron is very futuristic and equipped with the latest in digital interface and driver information technologies.

Audi has equipped its electric SUV with controls from the future, while combining the key features of the brand, such as top quality and luxury, which make passengers feel pleasant and familiar in an environment of aesthetic superiority. 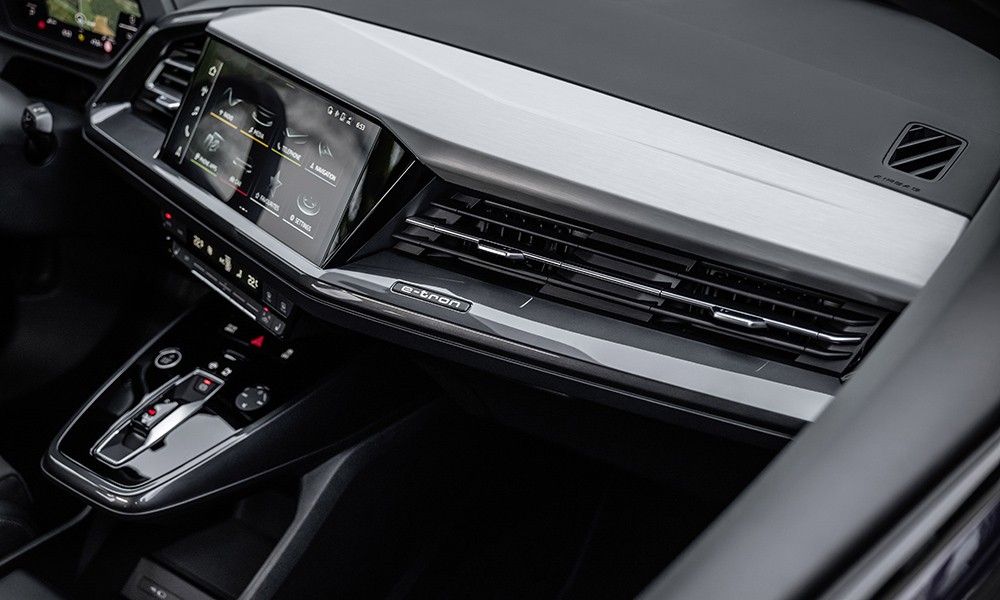 One of the highlights of Q4 e-tron and Q4 Sportback e-tron is large head up display with augmented reality elements.

All information concerning car systems (such as the navigation system) is displayed on the windscreen and with a highly advanced mechanism, which are placed like a floating image at a distance of about ten meters from the driver, thus uniquely connecting the real environment with virtual reality. 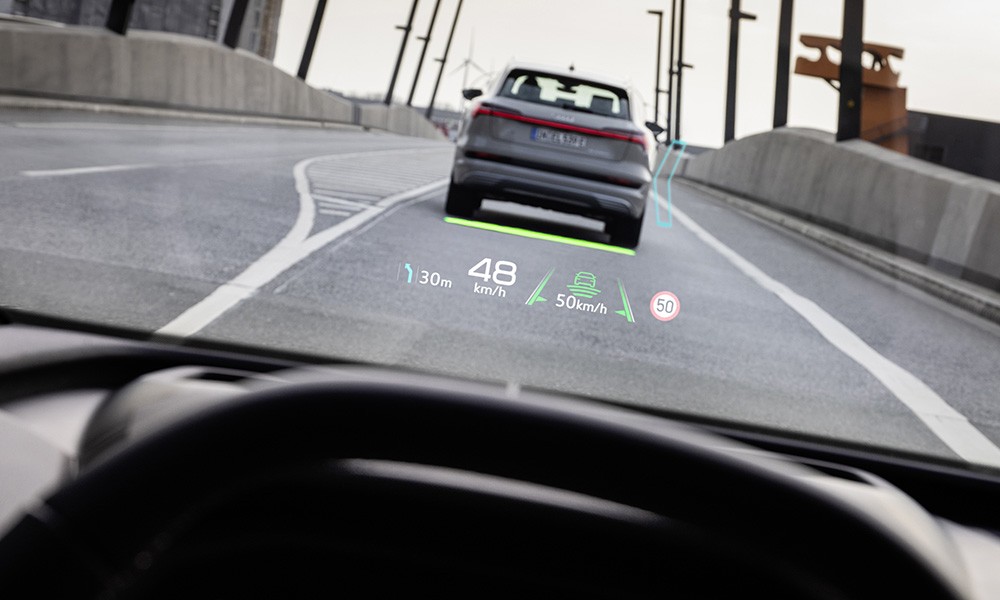 In the Audi Q4 e-tronthe control and display units take over the operation of the design elements. The car also offers a third level of operation: voice control. Thanks to the optional Audi connect services, MMI navigation is a visual highlight with increased capabilities and a host of new features. 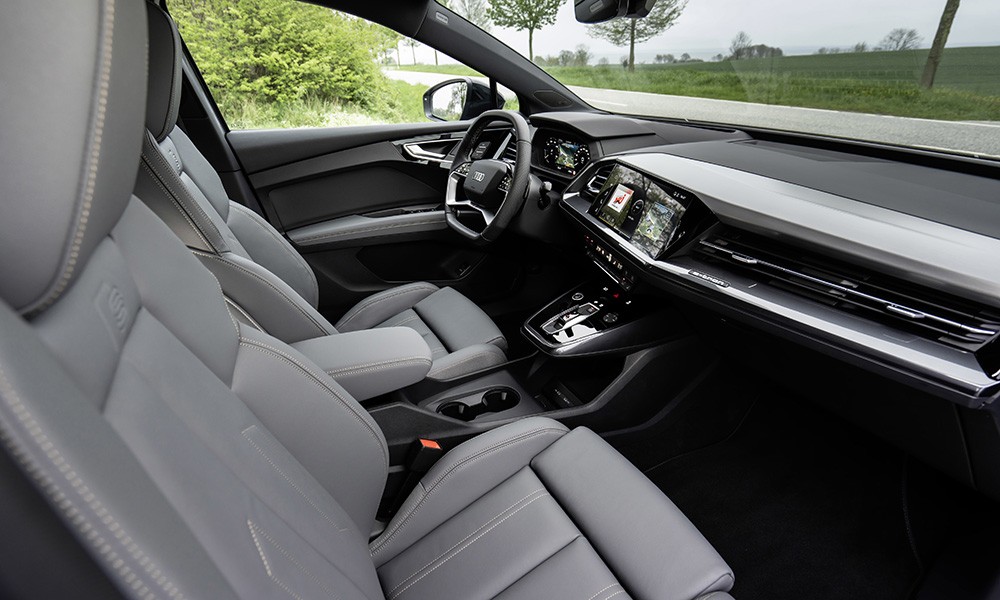 At the same time, Audi took care to create an environment of luxury and well-being within Q4 e-tron PiUnique equipment components such as the optional Sonos premium sound system were available.

This system consists of ten high-performance speakers, with rich bass and incredible sound reproduction, that transforms the journey with Q4 e-tron in an unforgettable experience. 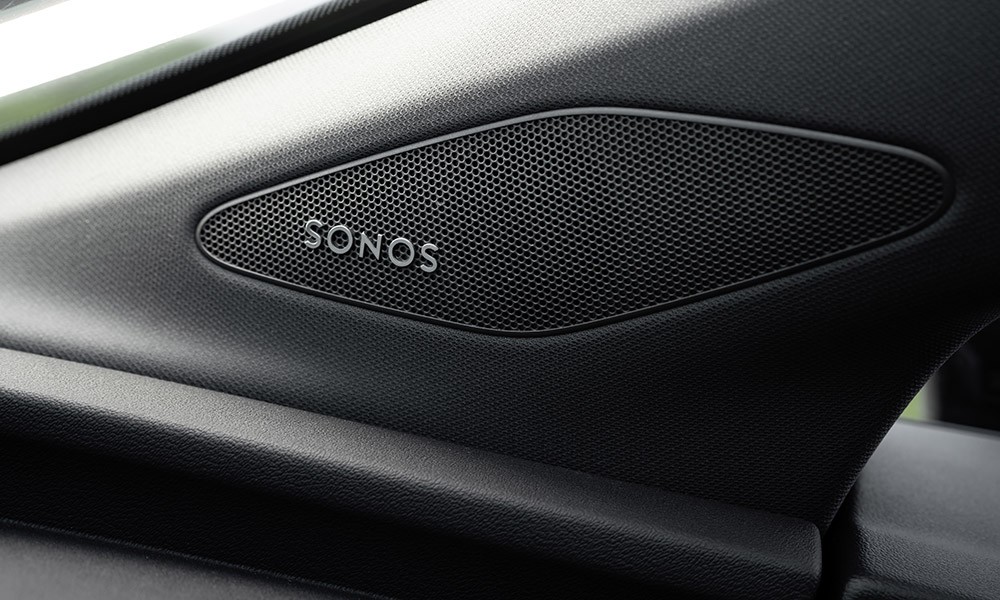 The technological superiority of the young Q4 e-tron is further enhanced by the complete package of technologies and systems for driver assistance, so that driving is much more relaxing and safe for the driver and passengers. 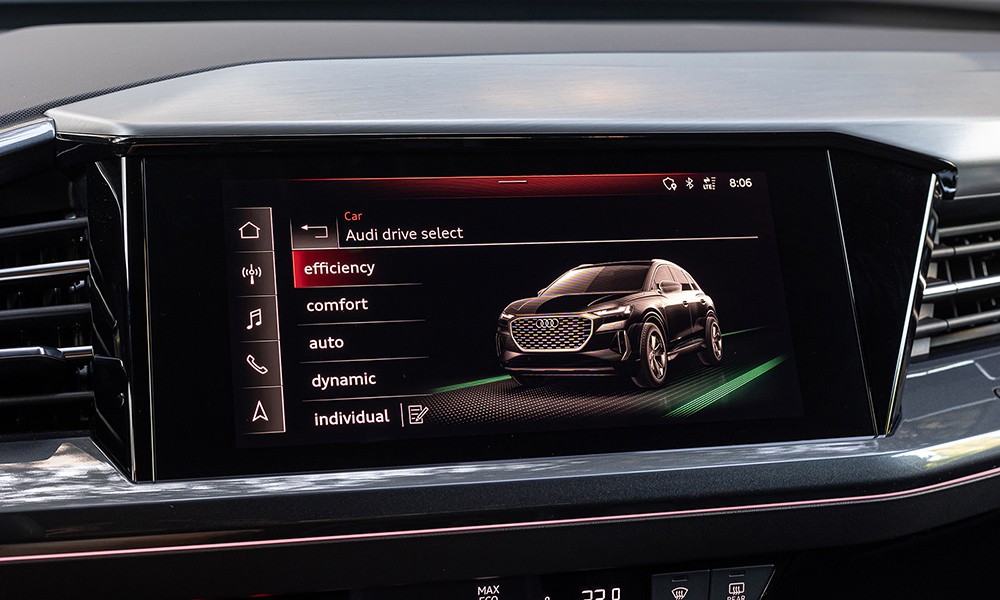 With the length of the body reaching 4.59 meters and thanks to the large wheelbase of 2.76 meters but also the absence of a central tunnel, The passenger spaces are great, and only comparable to those of large SUVs.

The advanced MEB platform also contributes to this by smartly placing the batteries under the passenger floor and the release of the maximum possible space for the comfort and pleasant living of the passengers. 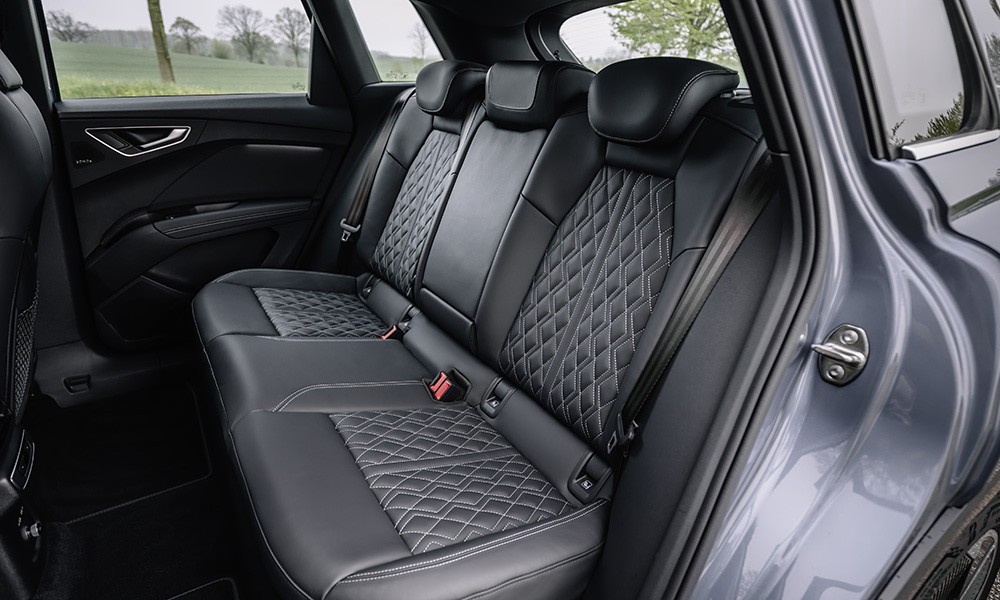 The rear seat passengers sit almost 7cm higher than those in the front while enjoy plenty of space for the head and legs. Audi compact electric SUV offers even more space thanks to the folding rear.

At the same time the new Audi Q4 e-tron offers dozens of spaces in the living room for storage of small items, the total capacity of which reaches 25 liters including the front cabinet. 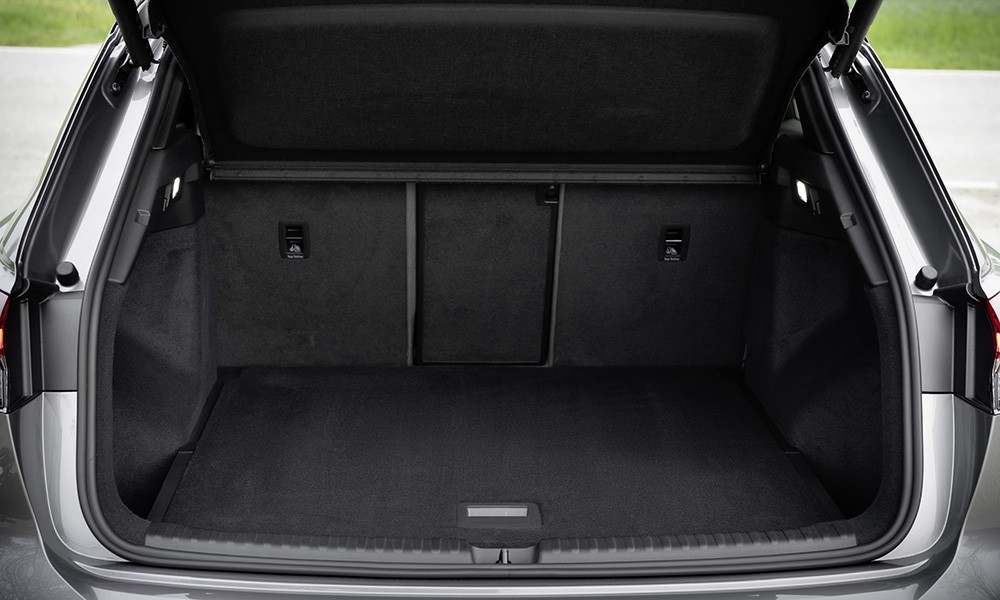 The new Audi Q4 e-tron and Q4 Sportback e-tron offered in one wide range of engine versions and battery capacity so that they can meet the needs and suit the lifestyle of the modern buyer. Two battery versions and three power versions are available. 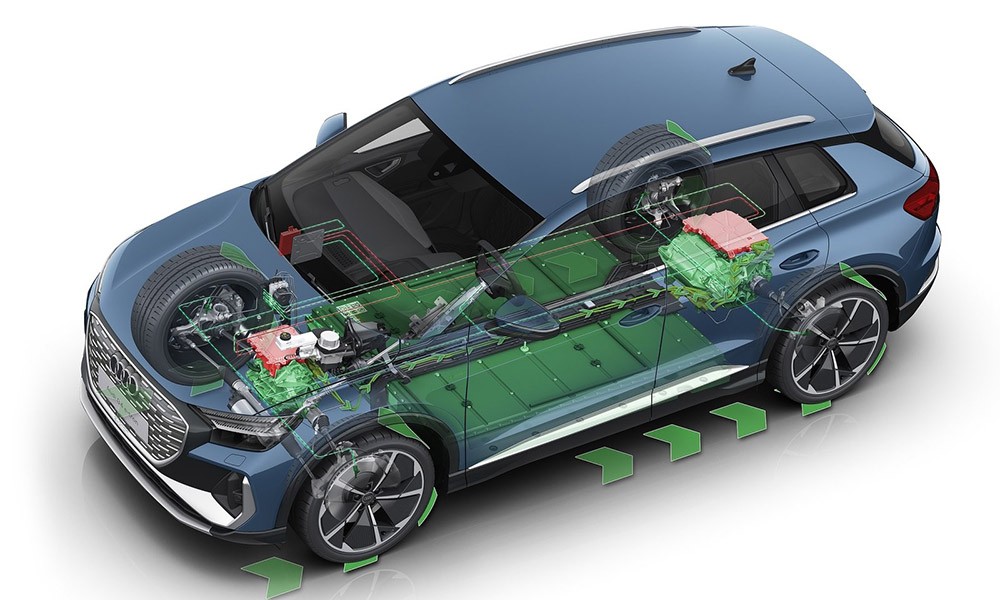 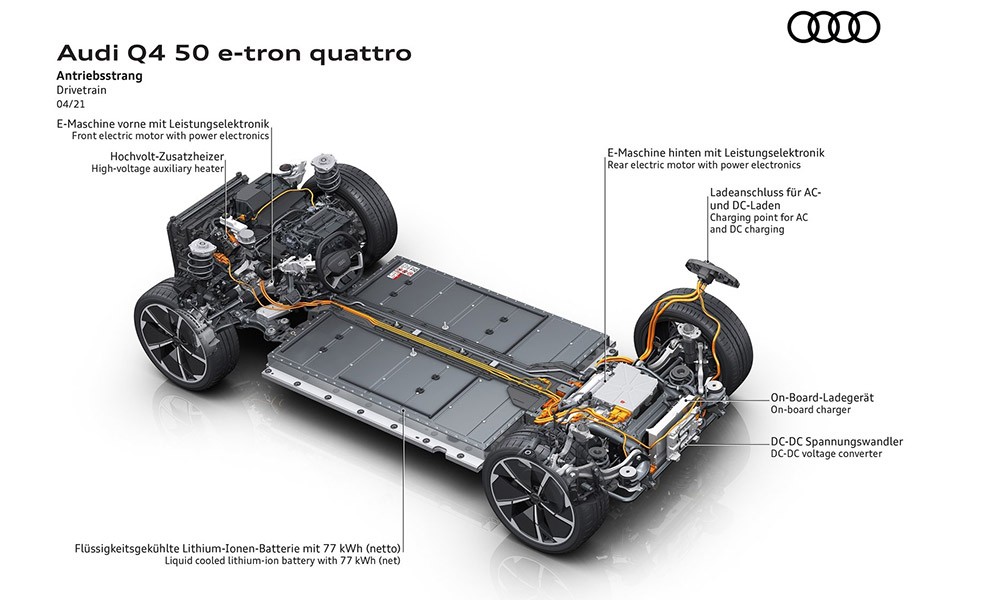 The performance of Audi’s new electric SUV in terms of autonomy is also impressive. For example, the Q4 40 e-tron has a range of up to 520 km (WLTP) with a single charge. Thanks to the maximum charging capacity of 125 kW, in ideal conditions it can charge enough power to travel about 130 km (WLTP) in just 10 ‘.

At the same time the company offers the possibility via the myAydi app for the owner to schedule charging or air conditioning and control his vehicle remotely from his mobile phone. 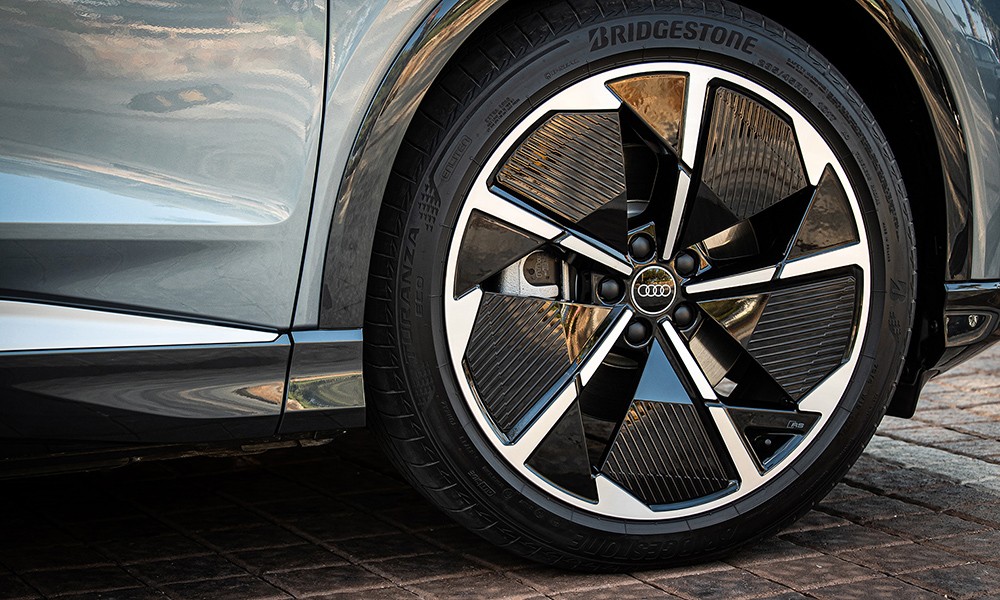 In addition to its rich mechanical and technological background, Audi enables its customer to make its own Q4 e-tron even more exciting and unique.

It can each buyer to design the exterior of the car based on his personal wishes in an extended personalization program.

Whether it’s the exterior color, the rims (which can reach the stunning 21-inch dimension in an exclusive design) or the headlights, the numerous equipment options will adapt the Audi Q4 e-tron to the unique taste and unique requirements of each buyer.

Equally exuberant are the possibilities of shaping the living room through a wide variety of seats, upholstery from ecological materials in combination with leather, very beautiful interior elements that add a sense of luxury and high aesthetics, which always characterizes every Audi car.

Both models are offered in eight different colors, including the new metallic shade aurora. The equipment versions are the Edition one, the S line and the Advanced line. 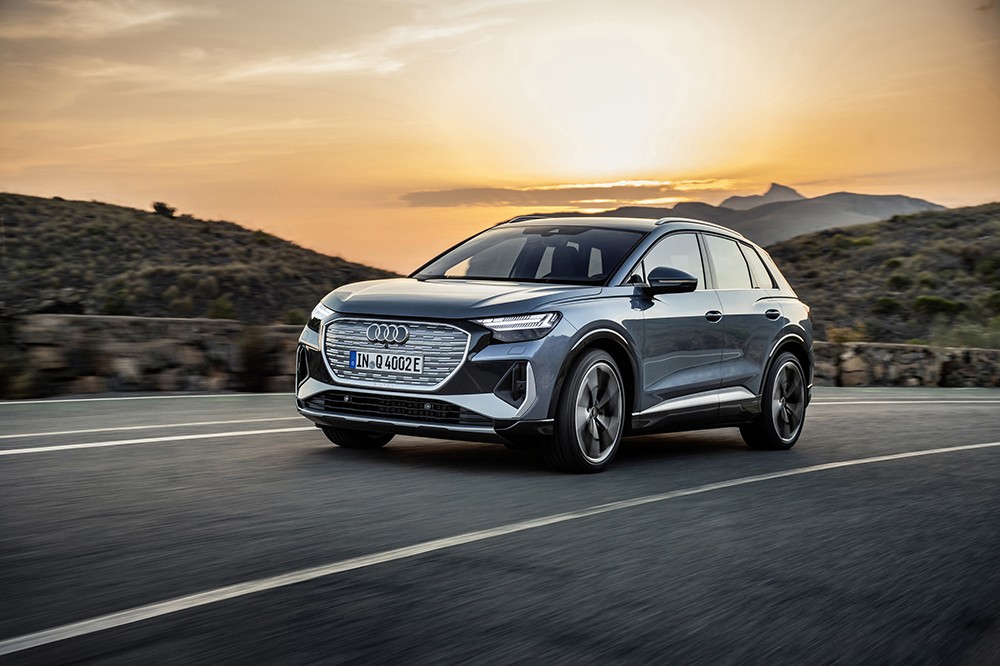 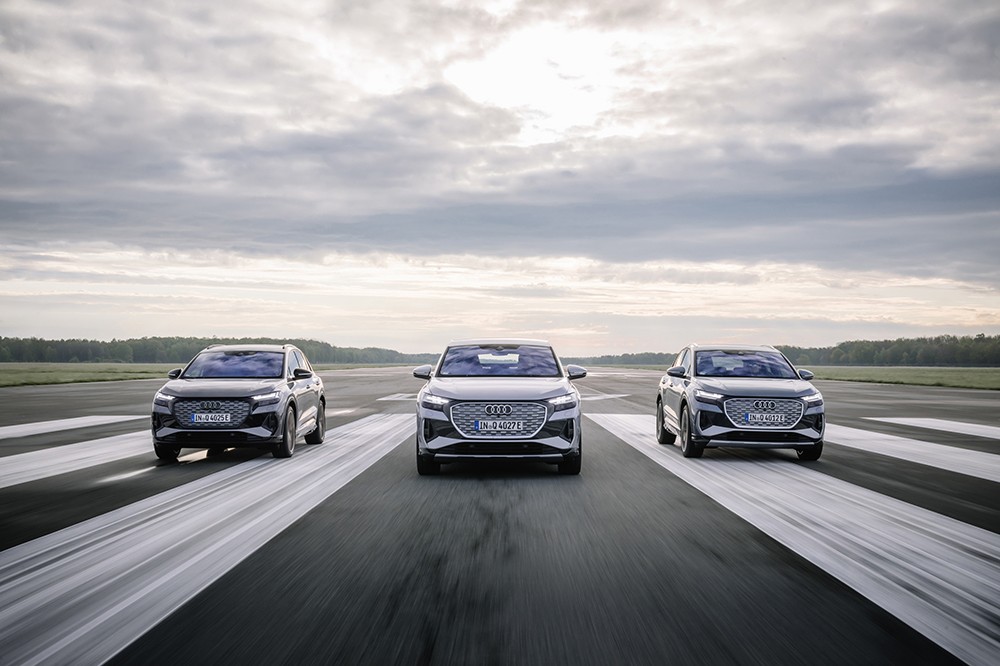 In any case the Q4 e-tron and Q4 Sportback e-tron are two unique electric SUVs which are at the forefront of technological developments todaymaking the electric drive and premium feel of a modern Audi much more affordable and particularly attractive not as a perspective of the future but as a reality of today.

In Japan, they found a way to increase the cross-country ability of the Land Cruiser 300

For the new Mercedes-AMG SL developed the first tuning kit