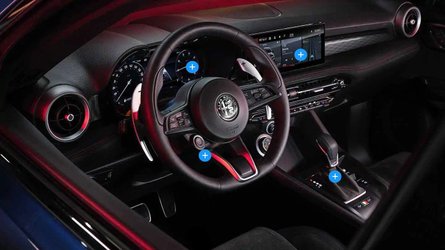 We’ve glimpsed the interior of the Alfa Romeo Tonale in teasers before, but the videos raised questions without providing answers. Now that all the details of the Biscione’s first compact SUV have been revealed, we can see the cabin and its layout, which are completely different from those of its bigger siblings, the Stelvio and Giulia.

The Tonale has taken a leap forward, with a much larger infotainment screen and digital instrumentation, as well as touch points with the rest of the range, such as the large aluminum paddles behind the steering wheel or the classic circular selector for DNA riding modes

Looking at the dashboard of the Alfa Romeo Tonale, one is immediately struck by the two screens, placed at the same height but without the effect of continuity found in some competitors. The dashboard no longer has two distinct circular elements but a single TFT screen.

We didn’t have the opportunity to “play” with the different screens during the presentation, but what we do know is that you can choose from three different graphic styles called Evolved, Relax and Heritage, the latter being inspired by the brand’s iconic models.

The steering wheel is inspired by those of the Stelvio and Giulia, with the start button placed on the left side. And if for now it is black, a possible Alfa Romeo Tonale Quadrifoglio could be distinguished (among other things) by a red button.

The automatic gear lever, of “classic” shape, without a smaller selector as on certain ex-PSA models, has been the subject of much discussion. The automatic gearbox will be the only option available for all engines, with 7 speeds for all but the Tonale plug-in, associated with a 6-speed transmission.

Alongside it are a few controls, including the audio system volume (Harman Kardon with 14 speakers), the electric parking brake and the activation or deactivation of the parking sensors. At the front are USB sockets for charging devices or connecting a smartphone, for which there is also a slot for induction charging.

Going back to the infotainment monitor, it is based on Android with a redesigned interface containing large icons to activate the different menus and the possibility of having split screens to display different screens, as you can see in the image above.

There are of course also voice commands advances with Alexa (Amazon’s voice assistant) to, for example, control certain Tonale settings, add products to the shopping list or connect to home automation devices. Compatibility with Android Auto and Apple CarPlay is of course available as standard on all versions, even in wireless mode.

The dimensions of the Alfa Romeo Tonale are 4.53 meters in length and a wheelbase of 2.63 meters. That’s okay, but some of the Tonale’s competitors do better. At the front, you sit on heated and ventilated sports seats, with a sporty design and well-marked flanks, with different types of coverings, in leather and Alcantara on the richest versions.

The rear seat, as is increasingly the case, is designed to accommodate two people at best, while those seated in the middle have to deal with a shorter seat and a backrest which, by integrating the armrest , has a rounded design. However, there is plenty of space and even tall people can travel comfortably without touching the front backrests and the roof. To increase comfort, there are air conditioning nozzles and a USB socket to charge your devices.

Finally, the trunk has a minimum capacity of 500 litres, which drops to 450 liters on the Tonale plug-in hybrid due to the battery pack. The design is very regular and the backs can be folded down in a 40:60 pattern, but there is no information on maximum capacity. There is also a practical flap allowing longer items to pass without having to tilt one of the two backrests.

Porsche wants to digitize the most beautiful roads in the world

2700-horsepower Nissan Patrol became the fastest SUV in the world