Bugatti Chiron Super Sport 300+ pulled out by police in London 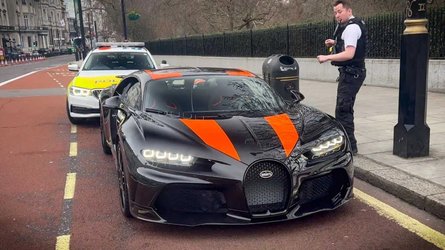 In many US states it doesn’t matter whether you have a license plate on your front bumper or not, but here in Europe it’s completely different. Incidentally, also in Great Britain. This has not changed even after leaving the European Union. And completely independent of which car you call your own. One of the fastest and most expensive vehicles in the world in the fleet? The law remains the law.

The owner of a Bugatti Chiron Super Sport 300+ had to find out that too. He was pulled over by police in London because his long-tail hypercar lacked a front license plate. We’re guessing the £100 (€120) fine won’t bring the car’s driver to the brink of bankruptcy, after all he just shelled out €3.5million to snag one of the 30 examples sold Bugatti builds as a whole.

For visual reasons, his decision is quite understandable – the black beast looks so much better without a front license plate. The car itself, a left-hand drive Chiron SS 300+, could be one of eight customer vehicles delivered by Bugatti a few months ago.

One of the immediately visible additional features of this example is the so-called Sky View. These are two fixed glass panels over the driver and passenger seats. The four-layer glass increases headroom by 2.7 centimeters compared to a normal Chiron roof.

Interestingly, the rear spoiler gradually descends when the car is turned off. We also see in the video that the 490 km/h machine has just 228 miles on the clock. Like the other 29 specimens, the car is finished in black and orange inside and out.

The W16 engine sounds sensational when you start it and makes wonderful noises even when idling. It is now known that Bugatti no longer wants to chase speed records. The Chiron Super Sport 300+ could go down in history as Molsheim’s fastest car of all time.

The production version is electronically limited to 440 km/h, but owners can ask the manufacturer to remove the shackles to unleash the machine’s full potential at Volkswagen’s test track in Ehra-Lessien.

Video: in Japan created a lunar rover with a head and hands

New Ford Mondeo spotted with license plate in the US