A Ferrari SF90 covered in rose petals for Valentine’s Day 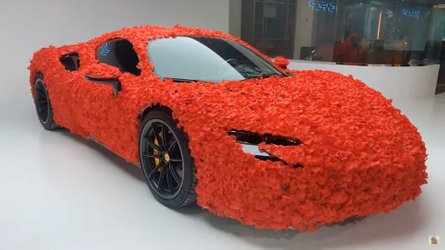 Here is a message for men planning to make a romantic gesture for their loved one on Valentine’s Day. If you’re going the traditional flower route, go all out.

Admittedly, not everyone can afford 1,000 roses, let alone a Ferrari. In this case, the Ferrari is just a temporary loan, but the combination of cars and flowers in this extravagant presentation is just crazy.

This grand gesture of love comes to us from Supercar Blondie, though she won’t make an appearance in this clip. Instead, we have Thomas and Romi, the lovebirds who are at the center of this lavish gift and who received help from Sergi, the master builder. The goal was simple: take a Ferrari SF90 Stradale and cover the entire exterior in roses, which Thomas would then gift to Romi as part of a Valentine’s Day surprise. The other part ? A short trip to Thailand, but we suspect that the car will be more memorable here.

The goal was simple, but achieving it obviously took a bit more work. The original plan was to glue 30,000 (yes, 30,000) rose petals to the exterior of the SF90, but a problem soon arose: the glue could damage the paint. Since the car was just a loan and is estimated at $800,000, a soft wrap was added to which the petals were glued. And in fact, the end result is surprisingly good. Yeah we say the Ferrari looks pretty nifty in its finish Rose Corsa.

Apparently, this is also the opinion of Romi who burst into tears of joy when she saw her. And the petals proved to be surprisingly robust in driving, the Ferrari leaving only a small trail of roses in its wake. It may only be a short-lived adventure with the supercar, but we think it’s an experience Thomas and Romi will never forget.

Lamborghini does not intend to stop its thermal models