The best “wedges” in history – Carneg.com

It was once fashionable to design “aerodynamic” cars, with the translation of this designation necessarily being “pointed” shapes, with sharp angles and here we have the most memorable cases in the history of the car.

It may have been “fashion” that passed but some manufacturers caught me and gave us some very typical examples of that view of aerodynamics.

So here we have you in alphabetical order, the models that have remained in the collective subconscious as the absolute “sharp” shapes, that “spread” in a wide range covering from seasonal supercars to small sports cars. It’s almost all at a time when the subject of aerodynamics was exhausted in body shaping with low front and straight, many lines along the entire length (and width). 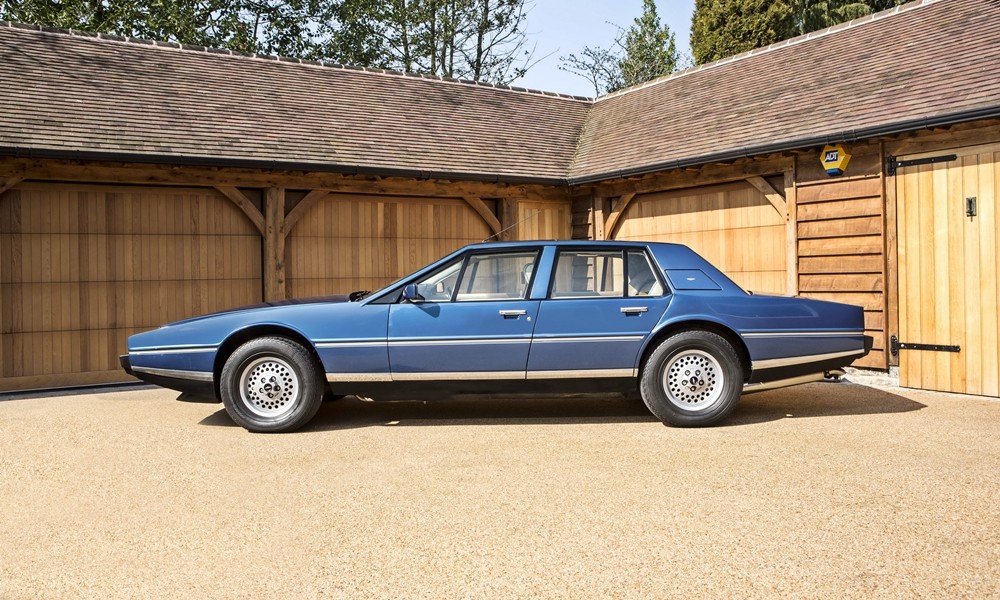 THE William Towns (1936-1993) was one of the pioneers and ardent supporters of the “wedge-shaped” form for cars. THE Aston Martin Lagonda 1976 is a very typical example, which had been based on the predecessor of the model name since 1972. Finally, some problems encountered during the preparation for production, were overcome with a two-year delay Lagonda arrived at the exhibitions. The model for those who had it, was an excellent example of top performance for the time, with advanced electronics in its equipment, which, however, were to be the “Achilles’ heel” of the car that plagued its owners with a series of problems. Even so, it continued in production until 1990, with an intermediate lifting in 1987. 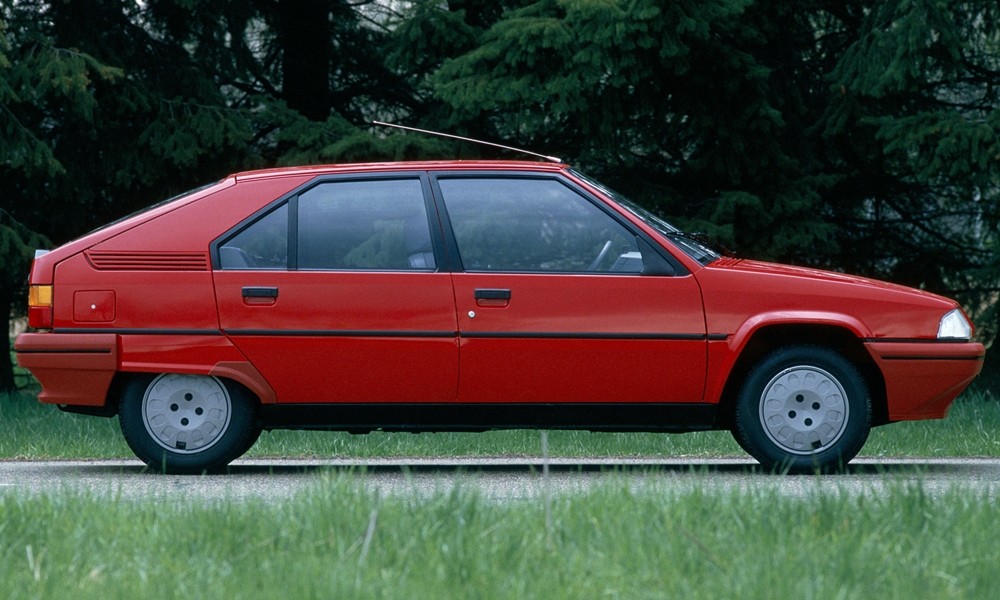 It is one of the cars that have the aesthetic “signature” of their creator very strongly on it, especially at the rear. THE Marcello Gandini (who was also responsible for Lamborghini Countach which we will see below) had established as a “trademark” of the models it designed, the wedge-shaped form with the low front part and the blunt angle behind the roof. In addition to his bold style BX for a market sector that is best known for its conservatism, the Citroen used plastic for some parts of the body (such as the hood and the tailgate) which was innovative for its time. However, despite the theoretically conservative audience to which the car was addressed, its total sales that reached 2.3 million, justified those who believed it by approving its production. 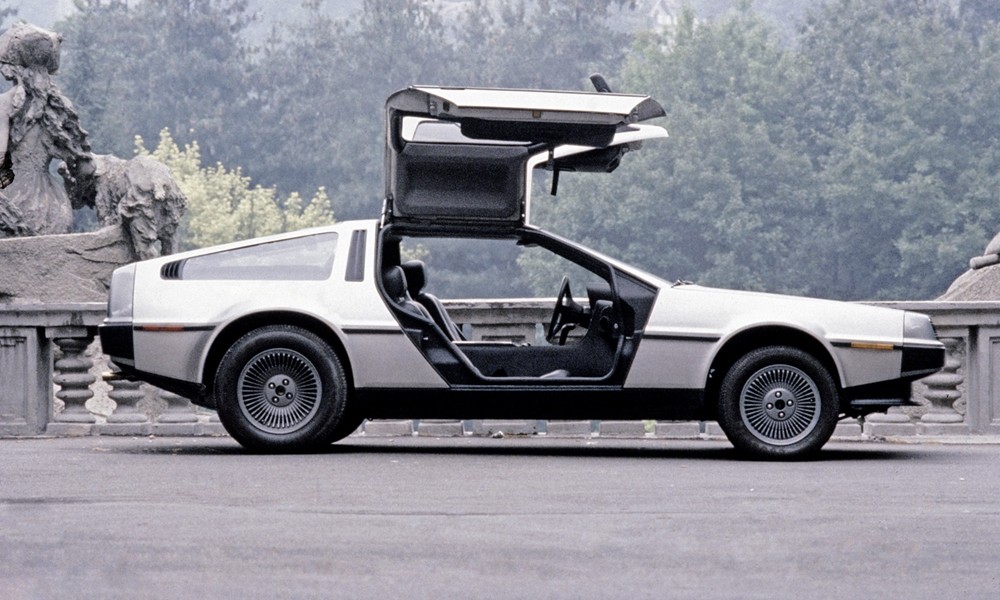 In the two years 1981-1982, 10,000 were sold Delorean making it clear that the characteristic wedge-shaped body with the bare steel on its surface, was a great success in proportion. Some events, regardless of the car itself, did not allow it to have the sequel that everyone expected and now it seems to be the emblematic model that featured a movie only. Today some attempts are being made to bring it back to production, albeit in limited numbers, but again the bold DMC-12 will not “excite” the general public of the car as something new. The objective data related to its “low flights” in terms of duration in production, had to do with the mediocre performance of the V6 engine it wore and the corresponding handling that did not flatter it. 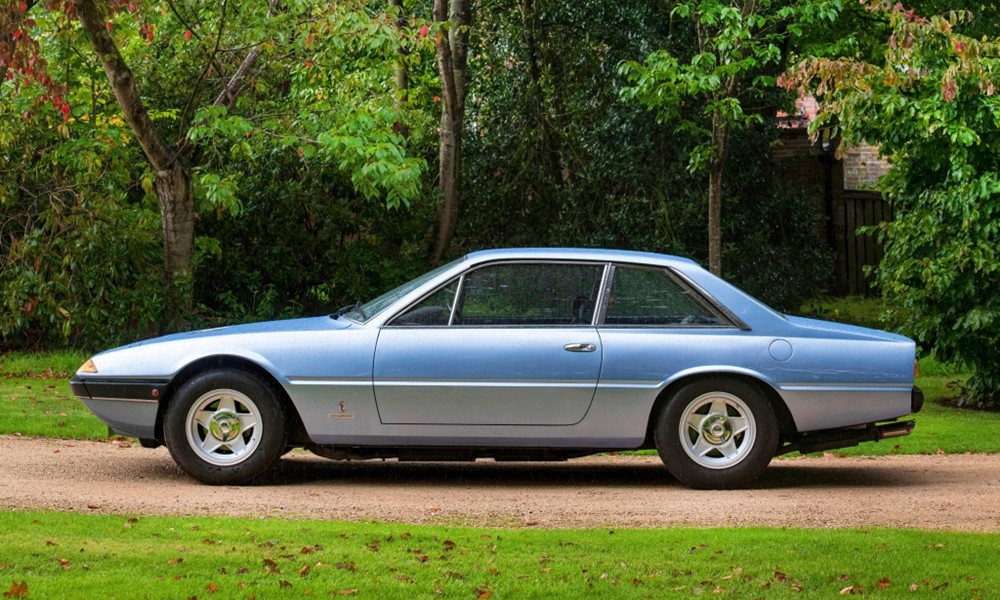 THE Ferrari had already dealt with the wedge shapes and its front Daytona is a shocking example. However, the model that brought the wedge-shaped reality to the range of the Italian firm, was the 365 GT4 presented in 1972. With his signature Pininfarina, the model had a very large deviation from the curves of previous models and showed the way to the design direction of the company in the 1990s. 365 GT4 had a very spacious cabin for four people and formed the basis for the series of models that later in the history of the brand, had kept the same aesthetic basis (400 and 412) but showing even greater power efficiency. 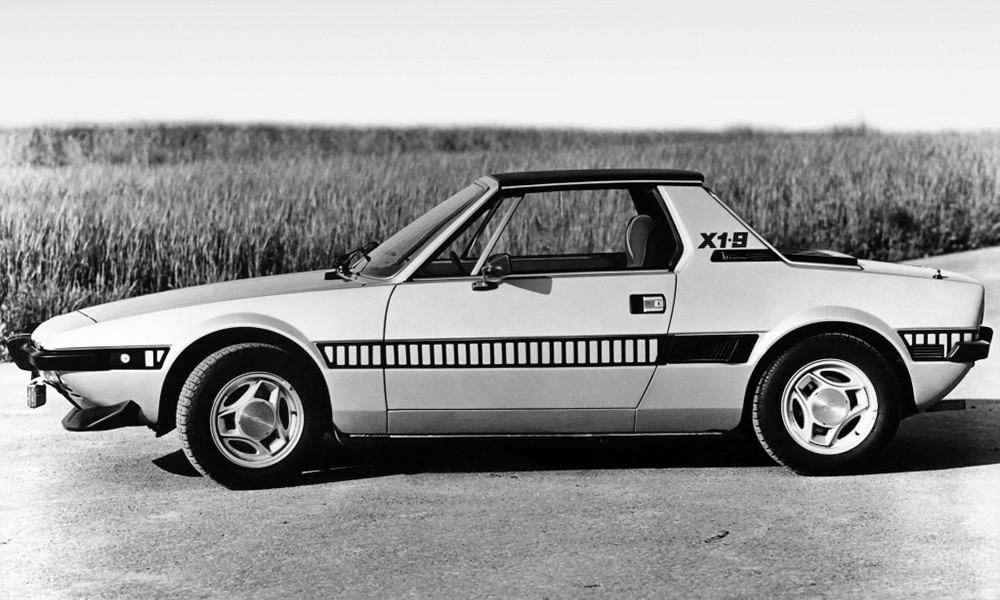 His appearance X- 1/9 (which has gone down in history and with the name of its designer, Bertone) was really what we call “avant-garde”. The low muzzle with the pop-up lights giving the extra touch, defined a particularly bold shape that in no way betrayed its humble origin and the use of spare parts from the great success of the time for Fiat listening to the name 128. The layout of the post with double adjustable scissors, made the two-seater centrifuge Fiat particularly interesting in driving and very “adjustable” according to the wishes of his driver. The low weight combined with the good performance of the engines with which it was available, gave the X 1/9 quite good performance and this was obviously appreciated by buyers who preferred it 180,000 times in the 17 years it remained in production. 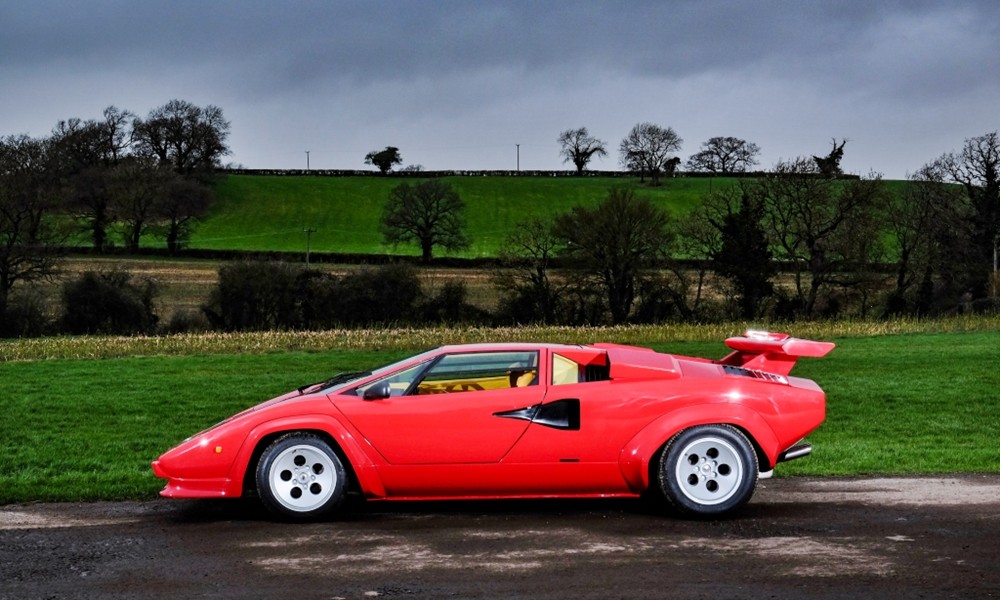 The absolute wedge of history, is of course the Countach of Lamborghini, which may not have been the first supercar of the company (since this title has the Miura) was and remains for many, the ultimate figure for the category. Designed by Marcello Gandini, the Countach took full advantage of the wedge shape, which made it appear to be moving at over 150 km / h even when parked. However, the appearance of the car was not just to pique the interest as well Countach was much more stable at high speeds compared to the model it was coming to replace (s.s. Miura). THE Gandini highlighted its wedge shape Countach with the characteristic doors that opened “scissor-mounted” upwards and became a trademark of all the top models of Lamborghini from now on. 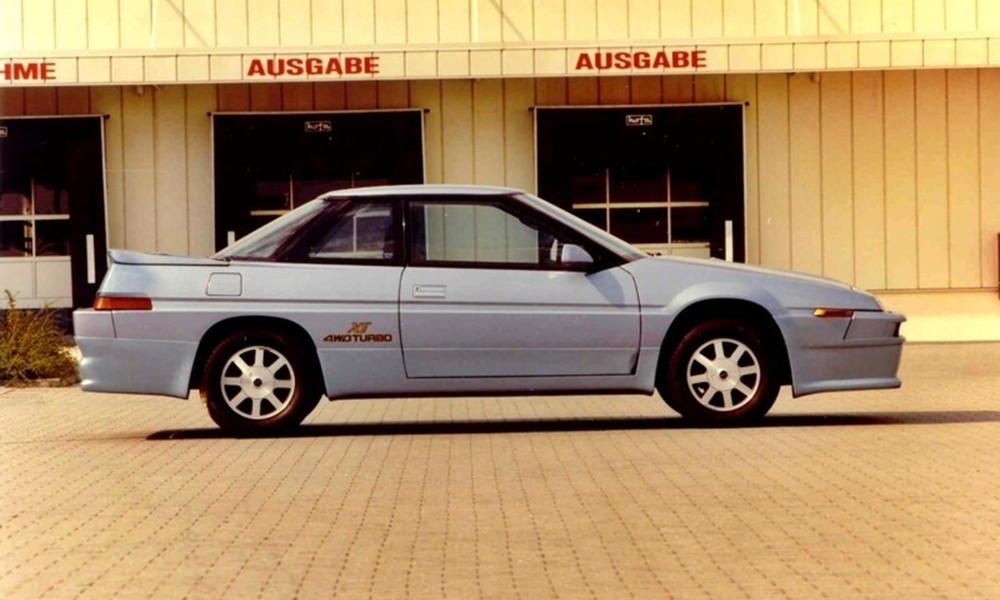 With the Subaru XT the Japanese company made its presence felt in the market in 1985. It was the first model to really make a different statement about the company that until then had some pick up and some mediocre proposals for small sedans and car hatchbacks. With the ΧΤ therefore, the Subaru offered a wedge-shaped coupe to the market that was to face stiff competition as it was sold in Europe at a price equivalent to one Porsche 924S. For the Subaru this price was justified, since its own model was four-wheel drive and thanks to its very good performance boxer of 1.8 liters, reached 100 km / h in less than 10.0 seconds. Interesting were the aesthetic details such as the recessed door handles and the single wiper that was hidden under the hood line. This resulted in a low coefficient of aerodynamic drag (Cd 0,29), proving at the same time that the wedge style was effective. 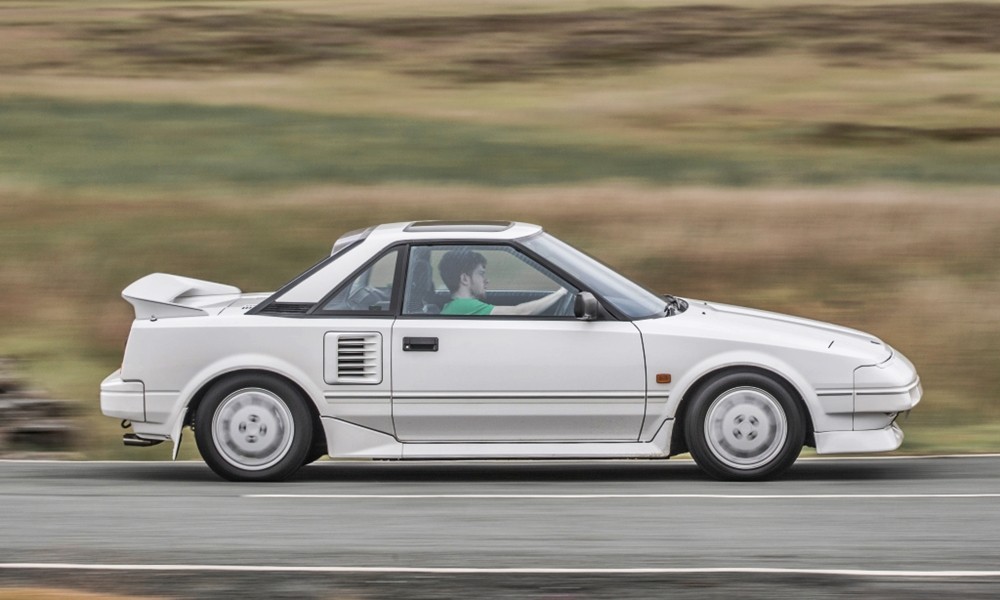 Its designer Toyota, Seiichi Yamauchi, managed to fit all the design features of the car – low nose, pop-up headlights, low body profile – also creating a distinctive shape for this small sports car. The layout with the engine in the center, emphasizes the stylistic choices of Toyota that took its design Yamauchi and “took it off” in terms of marketing, promoting its sales. His first generation MR2 proved to be a great success for the Japanese company, as it found 166,104 buyers during its five-year production from 1984 to 1989. Most were with the 1.6-liter naturally aspirated 122-horsepower engine, although the Toyota also sold a turbo version of the model in the US, with 145 hp. 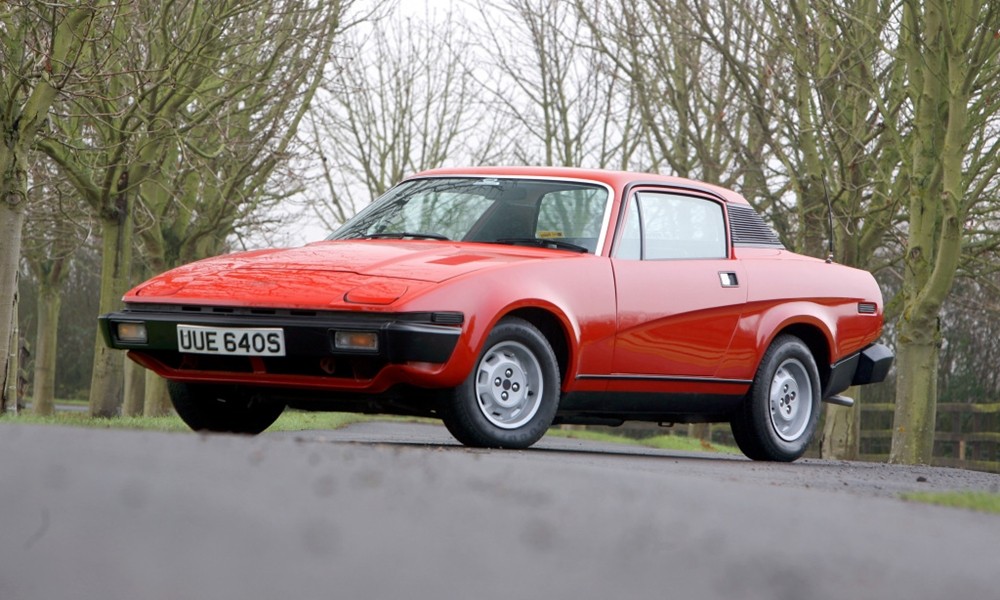 Apart from Countach which is in our opinion the most characteristic car of its kind, both the X 1/9 and the TR7 were the most emblematic “affordable” coupe for Europe. The design belongs to Harris Mann, who dared to make a big difference compared to the older models that the Triumph in its range. Initially introduced in 1975, it was only available as a coupe as there was concern that open cars would be banned in the US, which was a very important market for Triumph. In 1979 came to the fore and the roadster version, which looking at it from the side intensifies the feeling of the wedge of the figure but already the model had managed to make a “bad name” with the issues of reliability that it presented. These were the things that limited him to what he had to do with the length of his stay in production and the 112,368 total sales. 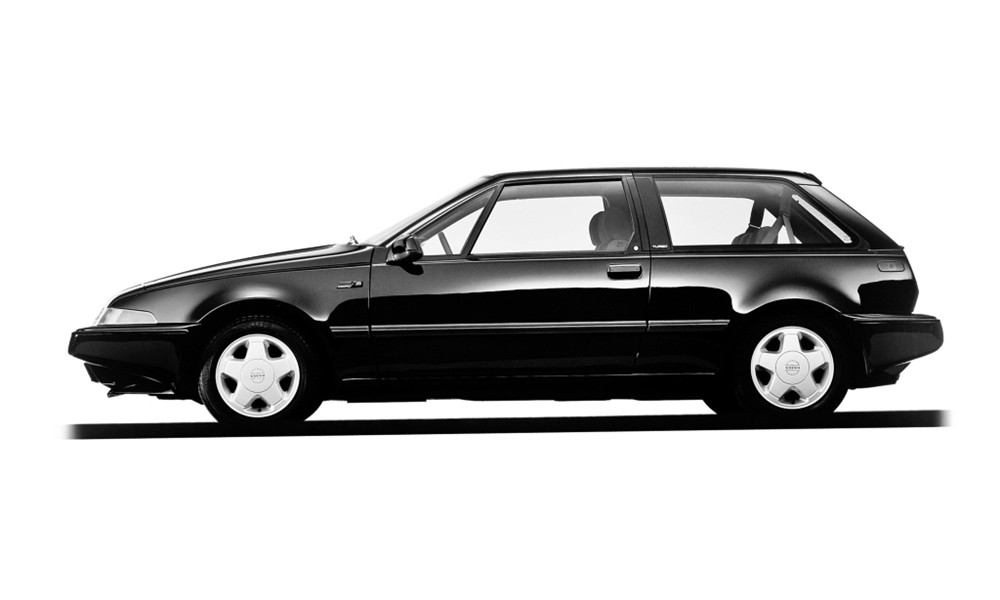 THE Volvo with the 480 IS made a difference in the 1980s. It was one four-seater coupe with sharp wedge-shaped face and mechanical parts from Renault. To them the model “owed” its mediocre performance and the corresponding commercial course within in 10 years (1985-1995) recorded 80,464 sales. What car enthusiasts need to remember is how 480 was the first Volvo car to have bumpers with built-in shock absorbers for shock and shock absorption energy.

READ ALSO:
Video: Five reasons why the Volvo XC40 Recharge is a best-seller
This is the Top 10 best sellers of December!
Video: A snowplow “crushed” 47 vehicles – 12 injured

On September 29, a group of off-road and adventure friends set off on an epic 2,500km journey, connecting Greece to...

Is Paris planning to ban all gasoline-powered two-wheelers?

These are the fastest tracks of Formula 1 - Carneg.com