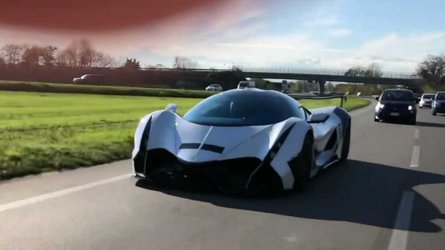 Imagine that you have just left your home to go to work. You take the usual provincial or peripheral road that you use every day and you come across this spaceship: the Devel Sixteen. Admittedly, the hypercar of more than 5000 ch (in its most extreme version) has not gone unnoticed in Piedmontese traffic. But what is the most powerful car in the world doing in Italy?

In development since 2008 and only unveiled to the public in November 2013, the Sixteen is a rather mysterious project. The hypercar designed by Defining Extreme Vehicles Car Industry LLC has been undergoing testing in Italy for some time.

The Devel notably uses the wind tunnel and the circuit supplied by Pininfarina. The hypercar from the United Arab Emirates is therefore committed to Italy for various road and laboratory tests. That’s why we might see her in traffic again in the coming months.

Will it really be produced?

The Sixteen was announced in a “road” version of 3048 ch, while the track model would be able to exceed 5000 hp and 5094 Nm of torque with a transmission derived from American dragsters.

The immense power comes from a V16 12.3 L achieved by the fusion of two General Motors V8s developed by Steve Morris Engines, but those who want a more “silent” Devel can settle for a version V8 of about 1500 ch, which is the one seen in the test.

The most extreme variant, on the other hand, should reach 515 km/h and cost around $2 million (€1.77 million). A “competitive” price in the world of hypercars if we consider that the rivals Bugatti Chiron and Koenigsegg Jesko cost between 2.5 and 3 million euros.

The brand is already taking its first orders, but owners will have to wait at least eight months once the development phase is complete. And for the latter, there is no precise date yet.

Ford sold the papal Bronco for half a million dollars. And sent the money to charity