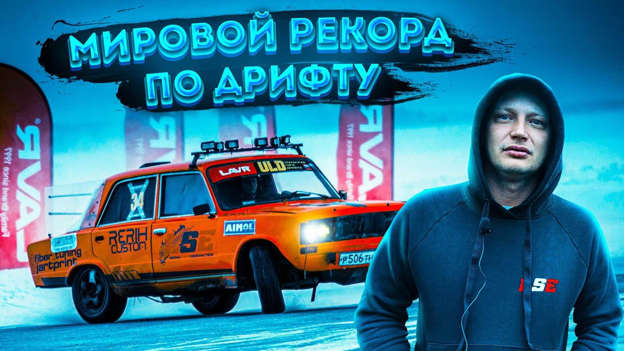 It started at 10 in the morning and ended at 4 in the early morning of the next day, having covered 439.8 kilometers, constantly going sideways!

In the strange world of records of all kinds, there is, among other things, that for the longest drift. The official entry in the Guinness Book of World Records was made about a year ago where one BMW M5 with instructor Johan Schwart managed to do 374.17 km consecutively with the side, moving (and refueling on the go!) for about 8 hours.

But a Russian is coming to claim this record with a performance that if there was no continuous recording and live broadcast on Youtube one could not believe it.

His name is Evghenii Novokşonov and to make his own effort he traveled to a frozen lake near the Ural Mountains. There he used a VAZ-2116 which had various modifications, mainly the addition of a 200 liter tank to which were added the 40 liters of the car tank.

His effort started at 10 in the morning and ended 17 hours and 34 minutes later, having covered a distance of 439.8 kilometers. In fact, the car’s refrigerator had given up the spirit after the 16th hour, but finally continued for another hour and a half until it completely surrendered the spirit.

Evghenii’s problem, however, is that Guinness has excluded Russia so it can not be officially recorded. All it can do is raise money from friends and sponsors to subscribe to the Russian Book of Records.

Anyway the video on Youtube lasting 17 hours and 34 minutes is an indisputable witness of the madness -and the skills- it carries.