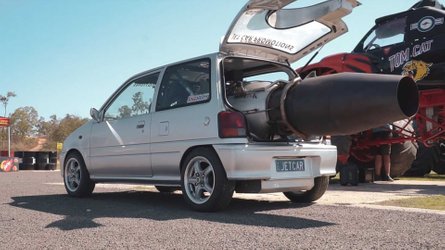 Being a little crazy can mean anything, depending on who you’re talking to. Some people run naked across a soccer field (usually after a few drinks), others dare to try bungee jumping. A few crazy people even try to jump into a frozen lake with their car. And then there are those who look at a tiny compact car and think: Yes, it needs a jet engine.

That’s not just a little crazy. This is demonstrably insane. And we love it. Take for example the Daihatsu Cuore, called Mira in Japan and other markets. A feather-light driving box, but with the appeal of a pack of crispbread. Until now.

After all, who wouldn’t want to drive a fire-breathing, third-generation Daihatsu Mira with 2,600 horsepower? That’s the estimated performance of this hot racer, according to David Nicotra, the owner and mastermind behind the Daihatsu Mira Jet Car.

What is that you say? The name is not very imaginative? Somehow we suspect David can’t hear you, because at least one is sticking out damn jet engine half out of the car. When you have something this incredible, you don’t need a catchy title.

And indeed it is very crazy. Nicotra says he drove 320 km/h in this tiny Daihatsu. 320. The L201 between 1990 and 1995 had a whopping 135 things. Granted, the Mira has lost some of its hatchback practicality, but there’s still room next to the driver’s seat for a few groceries.

You’d think there’s space under the hood where the stock engine used to be, but here’s the rub: the stock engine is still there, pumping a whopping 35hp to the front wheels (the Cuore actually had 41bhp in this country). In fact, the car is still road legal in Australia, where Nicotra is from.

The Daihatsu may be road legal, but it entertains people at trade shows and special events. It’s not the only jet engine in Nicotra’s garage, either; he also owns a monster truck, but somehow it doesn’t seem quite as wild as this Mira. Either way, both vehicles are active at shows and we suspect they’ll put a smile on fans’ faces.