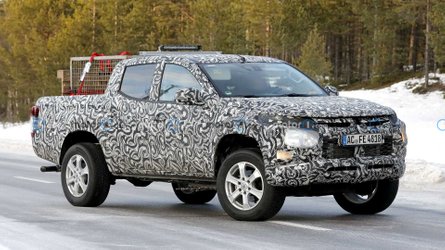 Spy shots of a new Mitsubishi are rare. So every time a new series comes out, we’re pretty surprised. The L200 is a mid-size pickup sold under many names and is currently in its fifth generation. This was presented in 2014 and received a radical facelift in 2018. But at the end of January 2022, the next generation was caught in Sweden.

Since this is a test vehicle, there is not much to say about the design yet. However, our photographers told us that it has a slightly longer wheelbase. This circumstance could indicate another platform. And that would make sense given that the Renault-Nissan-Mitsubishi alliance is likely to be looking at new cost-cutting measures, possibly putting the Navara and L200 on the same architecture.

As a reminder, the current Navara spawned the Renault Alaskan and the ill-fated Mercedes X-Class. In addition, Nissan no longer makes the Navara in Europe, where the commercial vehicle was assembled in Barcelona. Production ended in December 2021 when the plant closed. However, a company representative said sales will continue for a while in 2022. Just as long until the remaining stocks are reduced.

If Renault-Nissan-Mitsubishi wants to sell its new truck in Europe, a hybrid or even a plug-in hybrid powertrain could be planned to meet the stricter emissions regulations. Only the future will reveal the details.

We expect that Mitsubishi and Nissan will clearly differentiate the L200 and Navara in terms of design. Although they will likely share many common components. The next-gen L200 is expected to launch either later this year or in 2023, with the Navara apparently at a later date.

Both models will have to compete with the facelifted Ford Ranger. As for the odds of a new Alaskan, we wouldn’t necessarily count on it. And certainly not with a new X-Class…

The electric track of Prince Albert for the exploration of Antarctica - Carneg.com