In 25 days the conclusion of the Committee for Attiki Odos! – Carneg.com

The Minister of Infrastructure and Transport stressed that on Wednesday, despite the holiday, there are more than 710 buses on the streets.

In restoring their function Public Transport after bad weather Hope, with first priority the security of citizens, but also in attributing responsibilities to Attiki Odos and ΤΡΑΙΝΟΣΕ mentioned o Minister of Infrastructure and Transport, Mr. Costas Karamanlis, talking on the radio station SKAI 100.3.

Mr. Karamanlis pointed out that the Government asked for one sincere apologies from fellow citizens who suffered, but also that for first time Government asked from private companies, the Attiki Odos and TRAIN, to pay by 2,000 euros and 1,000 euros respectively in drivers and passengers. He stressed, however, that this is not enough, but it must be state to translate into concrete political acts the commitments to the citizens.

“We do not hide things under the rug. As you well know, the Attiki Odos and the big ones highways belong to individuals, who have one concession contract and very specific responsibilities “, noted o Minister of Infrastructure and Transport and stated that with the Law 4663 of 2020 the Government has created for for the first time a framework of sanctions.

Mr. Karamanlis even underlined that: “Beyond payment to be given, does not give up – and we must make that clear – none of anything. The money these will be given immediately and beyond, whoever citizen wants to claim something moreis free to do so. “

He also noted that the Ministry of Infrastructure and Transport will examine why they existed problems in Attiki Odos and the competent committee, already established, will deliver within 25 days the finding and will there will be severe sanctions where it should.

As for the railway, explained that problem due to bad weather created with four trains, reminded that will compensation of 1,000 euros to passengers and stressed that: “Research it will be held there as well and with great composure, responsibilities will be assigned where they should be “.

As for the changes to be made in order to avoid similar situations in the future, Mr. Karamanlis reminded that already Mr. Mitsotakis referred to cabinet in coordination between stakeholders, where is the state, ministries, the region and the municipalities. 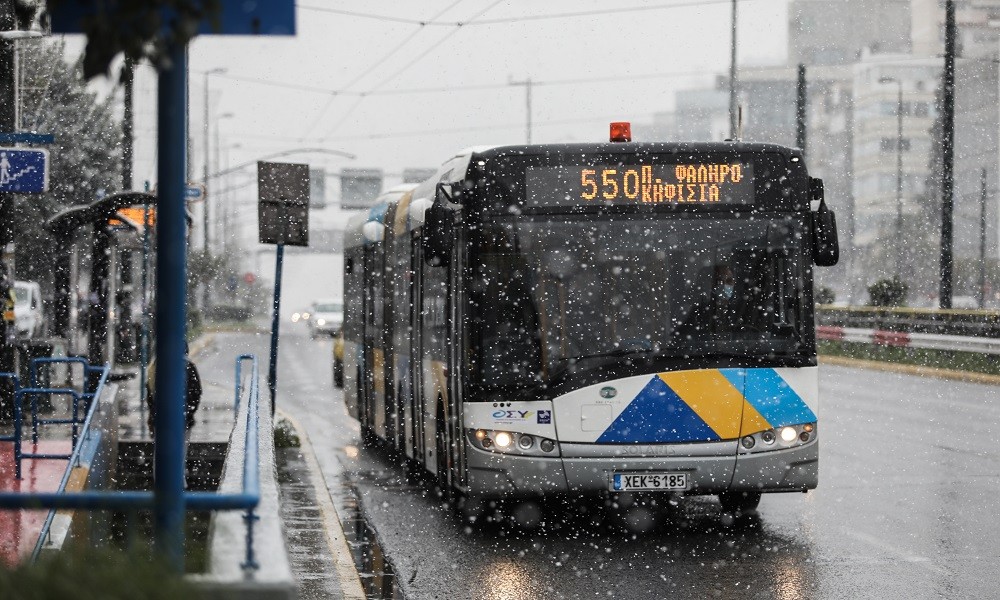 Regarding gradual withdrawal of public transport from the release of Monday, Mr. Karamanlis pointed out that: “We made a difficult decisionWhich, however, was absolutely necessary. This is because, as he explained: “At two-two and a half in the afternoon, we saw that weather phenomenon it was uncontrollably, we saw that the roads in the Attica basin they had a lot of problems. We could not risk having problems with them buses, to fold for example a bus. So we decided to we withdraw the buses».

Mr. Karamanlis also stated that: “Today is the first day, thanks to the efforts of all employees and the management of companies, we currently have more than 710 vehicles on the roads“, Which -as he noted- are more than they take to the streets on holidays, as proclaimed today.

“Early this morning at five there was an extraordinary meeting. The OSY supervisors on the streets and saw the situation and we decided that the buses would leave “, added the Minister of Infrastructure and Transport.

He stated that at the moment the Metro Lines 2 and 3 operating normally and announced that: “An order has been given to clear all the stairs leading to the stations. Subway, “Because there is frost and we have to be careful.”

He also informed that the Metro Line 1 (ISAP) at the Department Piraeus – Peace and said that at noon will be given to traffic single line and section Peace – Kifissia.

“We are working with all our might to restore all the other lines. We do not sit idly by “, he stressed and underlined that:” The Public transport start and work. Where there are problems, we deal with them. “If there is a problem, we put the safety of passengers and citizens first.”

Mr. Karamanlis He also criticized the opposition for withdrawing them Public Transport on Monday. “If they came out buses and they became accidents and more problems were created, we would be accountable “, he pointed out and stressed that:” This Government puts in the foreground and first priority the security of citizens».

READ ALSO:
Attiki Odos: “Hate” for the Greek State that gave her the project
What is the fine that Attiki Odos will pay? – What does the contract say?
Official! 2,000 euros for each trapped car – 1,000 euros for train passengers

Bentley has revealed the release date of the first electric car

Does too much technology make cars insecure? - Carneg.com