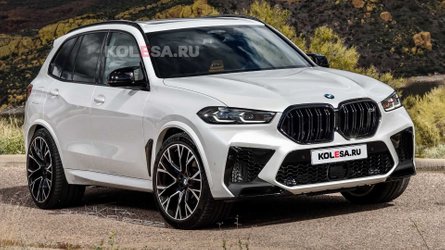 BMW starts the facelift machinery early in the new year. The refreshment of the 8 series was presented yesterday, the 3 series should follow soon and various smaller measures for the 2022 model year have already been presented across the series. We are also expecting the facelift of the X5 shortly. This also includes the top model X5 M.

The first prototypes of the revised performance SUV have already been spotted. Based on these spy shots, our friends at Kolesa have explained what the X5 m facelift could look like.

With the LCI (Life Cycle Impulse), the Munich-based company will make changes to the front and rear of the super SUV. This is shown by the appropriately camouflaged areas on the prototypes. The new renderings now make these updates visible in a very realistic way.

These include the narrower headlights, the revised grill and the newly designed air intakes in the apron. Less seems to be happening at the rear. There may be changed graphics for the taillights. How it looks with the rear apron including diffuser remains to be seen. The four-pipe exhaust should be adopted unchanged.

If the renderings are reasonably accurate, customers – at least in our opinion – expect a more coherent overall picture at the front with the narrower lights.

As far as the interior is concerned, the drawings do not, of course, provide any information. For the X5 series, however, we expect the transition to the more modern iDrive 8 infotainment with the then combined screens for instruments and infotainment. The 3 Series facelift will also adopt the new system that debuted in the electric iX and i4.

In all likelihood, no innovations are to be expected on the drive side. The X5 M will continue to be equipped with the 4.4-liter twin-turbo V8, which should continue to deliver 600 hp or 625 hp as a competition model.

The freshly made X5 will celebrate its official premiere in the coming months and will probably also have the X5 M in tow. Let’s see what else snows in on information in the next few weeks. Until then, these renderings give a pretty good preview of what to expect.

Nissan Micra counts down - Who will be the successor? - Carneg.com

The first batch of Mazda CX-50 crossovers has been assembled

Official: The classic Mini will experience a second youth - Carneg.com