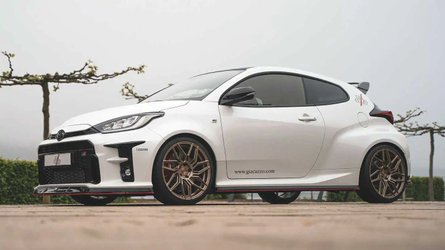 The GR Yaris is a success across the board for Toyota. Most test reports were ecstatic, the fans are probably still over the moon and the demand leaves little to be desired. We don’t have exact numbers as far as new registrations are concerned, but according to the manufacturer, more than 1.00 GR Yaris were sold in Germany alone in February 2021 alone.

Anyone who thought that the 25,000 rally homologation would be a madness that could never be achieved is probably wrong. It should also be clear that a car like the performance Yaris does not remain original for long in quite a few cases. Some tuning has so far been presented for the all-wheeling rally dwarf. Among other things, an absolutely extreme implementation of Powertune with 479 (!) PS. Now there is a body kit from tuner Giacuzzo.

The optics package consists of a front spoiler lip (289 euros), side skirts (469 euros), a glossy black roof spoiler (439 euros) and a rear diffuser (319 euros). A corresponding parts certificate is available for all parts.

A flap exhaust system and a KW Clubsport coilover kit also come from the optimizer from Menden. The now much smaller space in the wheel arches is filled with Barracuda wheels in 8.5×19 inches for 399 euros each. This is the Dragoon rim from the manufacturer’s so-called “Ultralight Series” (how ultralight the parts are unfortunately not revealed) in high-gloss bronze. The tires measure 235/35 ZR 19.

Nothing is changed in terms of performance in the joint project by JMS Fahrzeugteile and Giacuzzo. The 1.6-liter three-cylinder turbo still delivers 261 hp and 360 Nm of torque.

Thanks to the Clubsport chassis, the Yaris shown here was still significantly faster than the series when tested by colleagues from Autobild Sportscars, giving the works GR Yaris three seconds at the Sachsenring.

There will soon also be a hot upgrade for the Über-Yaris ex works. Toyota showed the GRMN Yaris at last week’s Tokyo Auto Salon.

In how many days are the Nissan Qashqai leather seats made? - Carneg.com