You will do the Athens-Patras with just 5.0 liters / 100 kilometers, you will cover close to 100 kilometers in the city only with the battery, you will have 306 horses accelerating in a storm, and you will drive a car that overflows with that unbreakable quality of Toyota. This is the RAV4 Plug-in Hybrid. And many more things.

The 90’s was one of the most fruitful for her Toyota. Only two of the many inspirations of that time, defined and changed the entire automotive industry to date. On the one hand the appearance of the RAV4 that took and lifted every decades-old notion of how cars are designed. And on the other hand the hybrid systems that the Toyotas put on the road, in true mass production and not in endless discussions at technology conferences.

In Toyota they looked away. And not only did they “see”, but they also created. And they reach today with five generations of RAV4 behind them and another four generations of their hybrid system. Now at the helm of a president, Akio Toyoda, a carpenter to the marrow, who does not stop believing in the need to keep the internal combustion engine alive and is skeptical of the endless tradition of electric propulsion.

All this huge technological and philosophical legacy of Toyota comes out intact in the car you see in the photos of our test. This is the plug-in hybrid RAV4, a new addition to the SUV mastermind’s hybrid arsenal, and a car that is called to play the role of the “flagship” and the showcase of Toyota in this category.

What different does Toyota bring to Plug-ins?
At the heart of the system is a 2.5-liter thermal engine which traditionally Toyota in its hybrid systems operates in the Atkinson cycle with high compression and emphasis on economic operation. This motor is combined with two electric motors, one at 134 kW and one at 40 kW, with the combined power of the system reaching 306 hp.

The interest in its specific system Toyota results from the fact that the battery is relatively large for a PHEV vehicle, reaching a capacity of 18.1 kWh. Thanks to this battery the RAV4 PHEV can cover about 75 km exclusively with electricity (or 98 within the city based on the City WLTP standard) while it takes about 7.5 hours to charge it in a household socket or 2.5 hours in a wallbox. 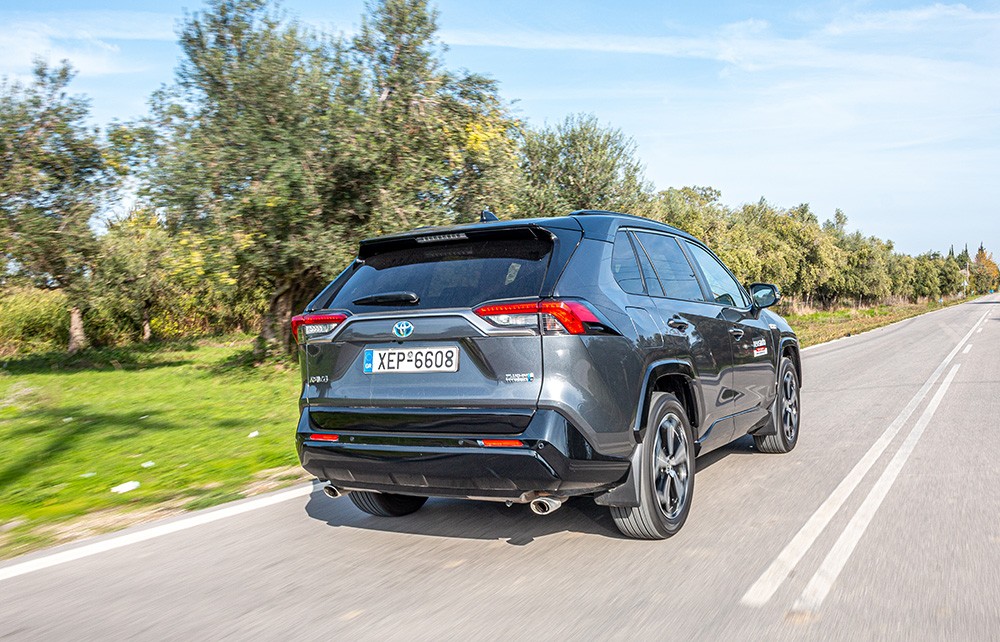 The system operates by default as electrical, with the battery being able to move the car electrically up to a speed of 135 km / h. There are four operating modes, EV (electric only), HV (hybrid), Automatic switching between electric and hybrid and a program for charging the battery through the engine. The consumption announced by the company reaches the top value of 1 liter / 100 km based on WLTP while the pollutants are at very low levels, just 22 g / km CO2.

The system is sought after to the last detail, with an improved automatic transmission for more immediate response and less mechanical noise (there are also paddles on the steering wheel for manual selection), the battery is positioned so as not to “steal” space from passengers, while there is an extensive effort to reduce the noise that reaches the inside of the vehicle by improving the sound insulation in several disputed areas. 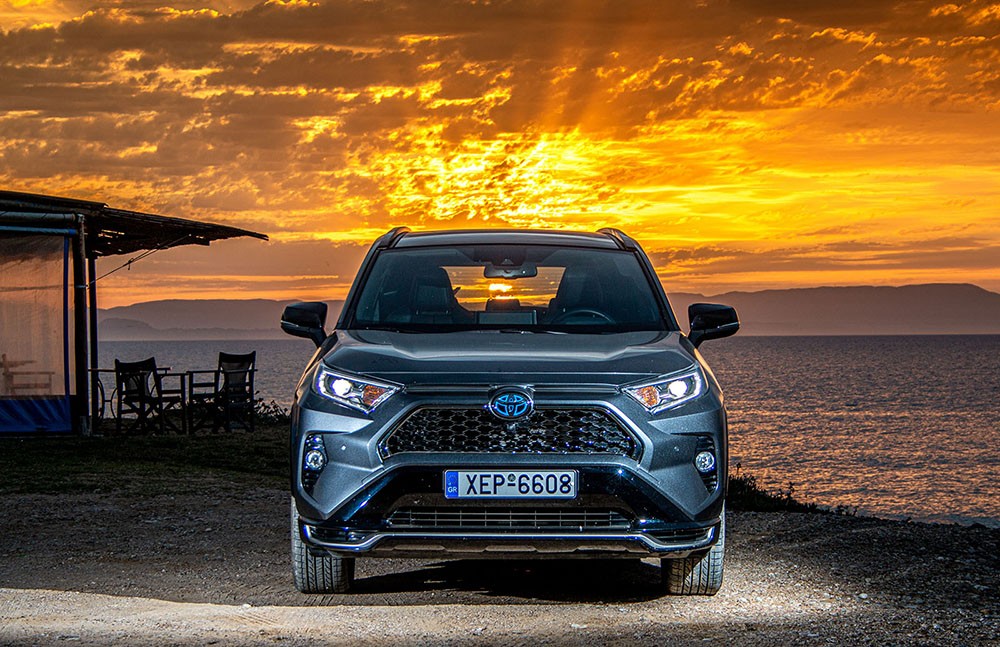 Thanks to the presence of the engine and the rear axle, The RAV4 PHEV has four-wheel drive features, which is based on Toyota’s advanced AWD-i system, which distributes power in real time between the two axes for optimal performance.

Comes with a function called Trail Mode which electrically provides “locking” characteristics of the rear differential through the permanent engagement of the electric motor mounted there. Finally, there are three driver programs, Normal, Eco and Sport which intervene in the response characteristics of the hybrid system and the feel of the steering wheel.

Finally how much does it burn?

So we come to the part where we talk about the middle ground. The actual consumption and not the factory measurements which result from logarithms and standard procedures that are far from the condition of true driving. We have and we say: As with any plug-in hybrid, you can not give a consistent answer as to how much such a car burns. You just give “scenarios” of movements in combination with the degree of charge of the battery. Given this, the constant charging of the battery, that is, our findings from the many kilometers we did with the RAV4 are the following. 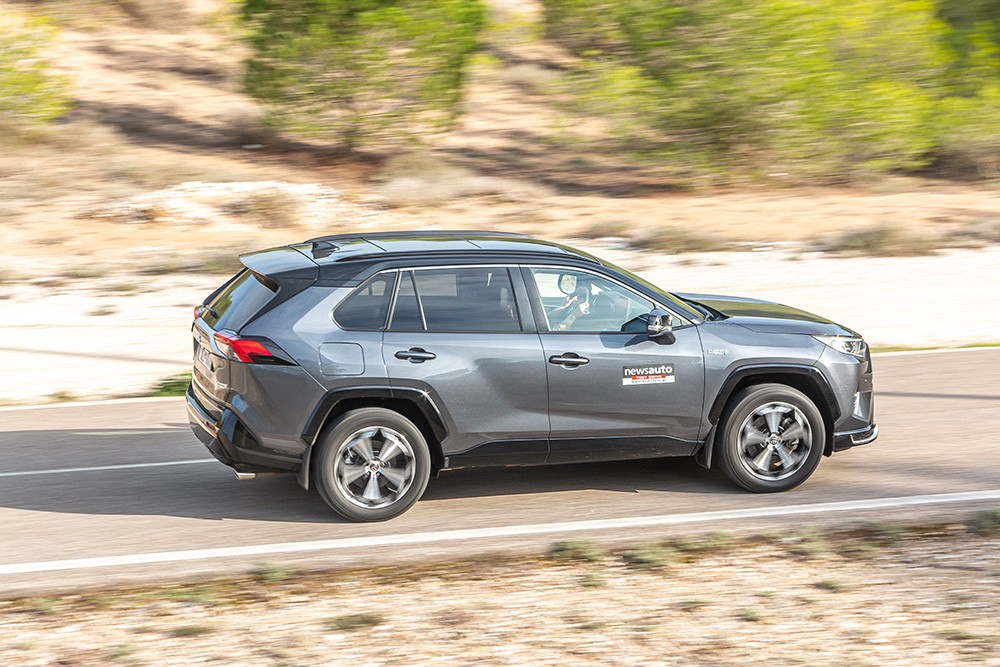 With the battery fully charged, you can cover about 70 km relatively easily with just electricity on the National Road (we reached from the “Ring” of Kifissia to almost Agios Theodoros and in fact svelta). Inside the city and with moderate driving you can relatively easily overcome the 90 km route with just the battery. 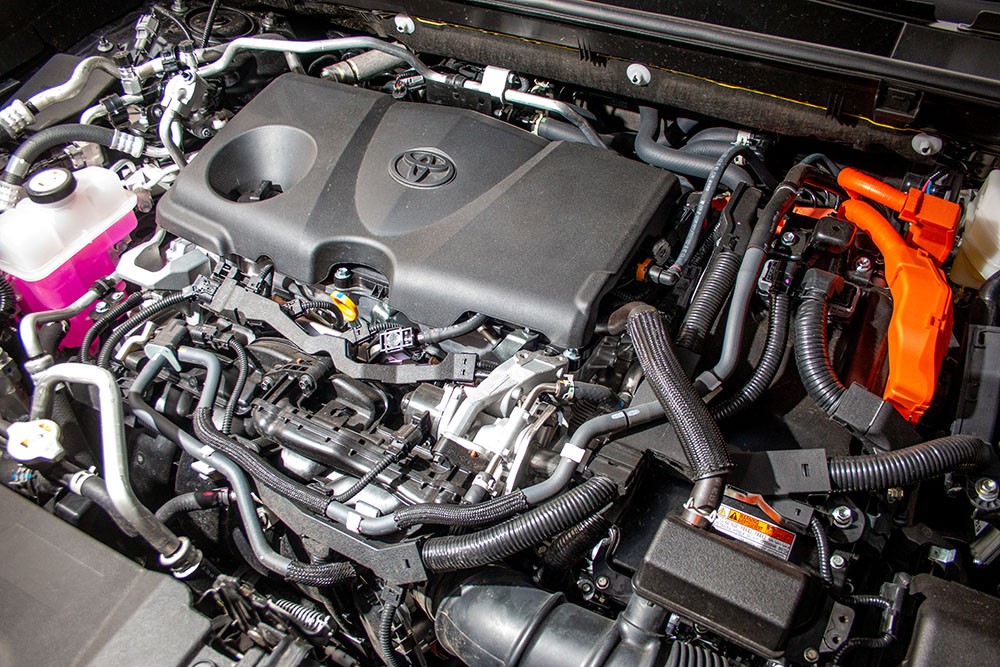 From the moment the internal combustion engine enters the game, the hybrid system undertakes to keep gasoline consumption as low as possible. For the 200 kilometers that separate Athens from Patras, and at a constant speed just above the speed limit, just exceeded 5 liters / 100 kilometers. 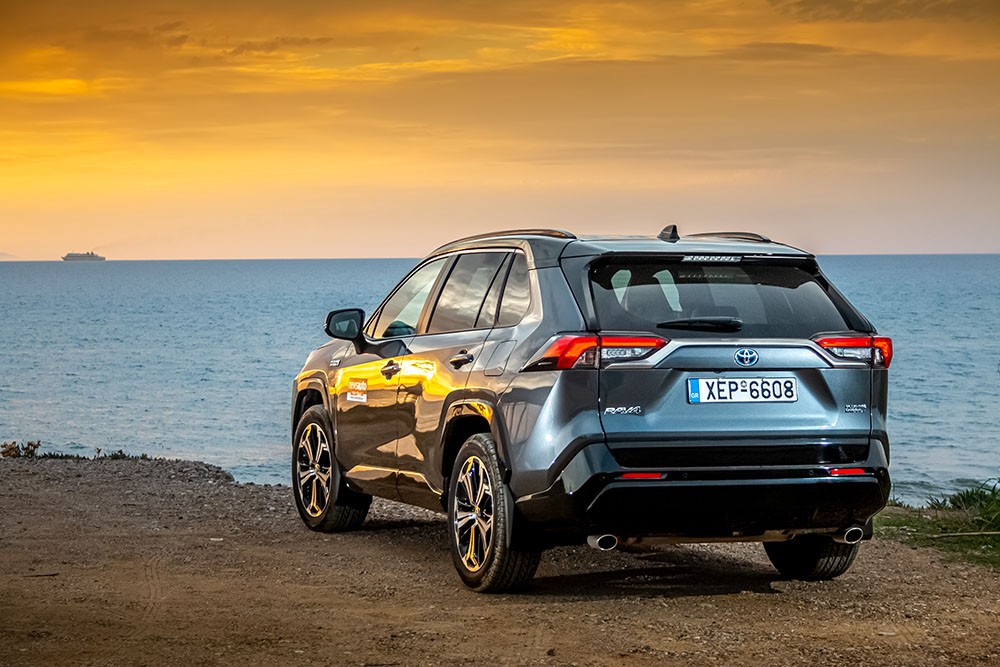 All of the above makes it clear that we are dealing with a highly efficient hybrid system, which -according to the indications of each route listed on the instrument panel display- can reach up to 70% in an electric motor / internal combustion engine participation ratio. Percentage that you reach relatively easily in the city and a little more difficult, as expected, on the highway.

Is RAV4 still driving?
On the road the plug-in hybrid RAV4 immediately wins you over with two things, engine performance and excellent ride quality. Starting with the first one, the way in which the almost two-tonne heavy body accelerates is quite similar to a purely electric model. 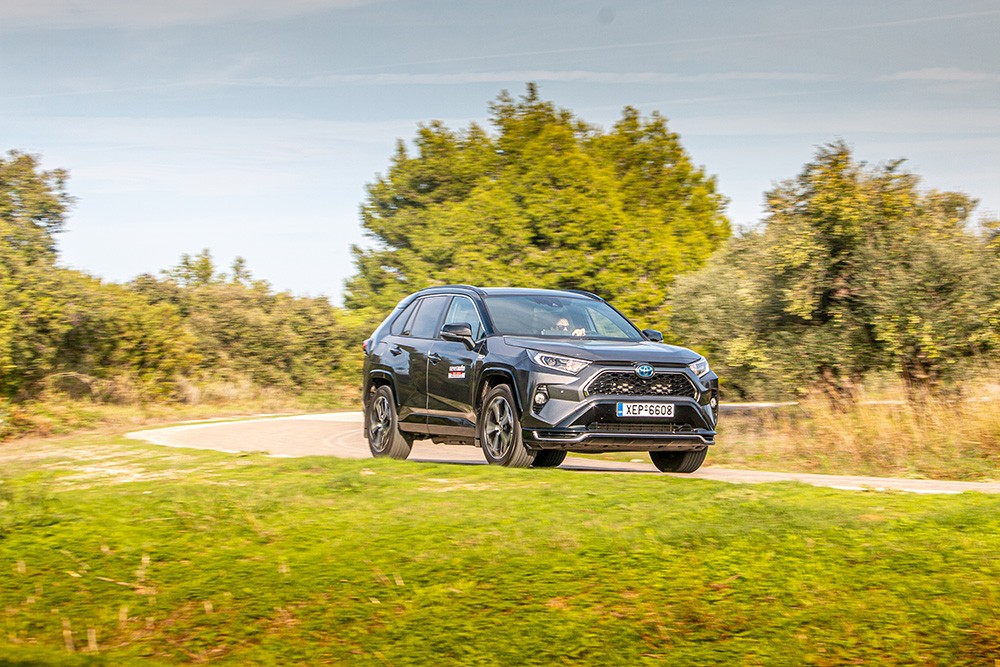 Despite the CVT type box with the known “issues” (which is however significantly improved) the RAV4 shakes forward with momentum and intensity, speeding up the mileage with astonishing speed, up to 180 km / h where the cutter intervenes. And all this in a very civilized way, with low noise levels and perfectly linear performance, without outbursts and strong reactions that exist in some powerful electric models.

The second element that characterizes the road presence of the RAV4 PHEV is the excellent setting of the suspensions and the incredibly “tied” frame. A combination that ensures a top scrolling quality, with clear premium features and great comfort on any kind of road. Reminiscent of a large Land Cruiser in behavior, with that “above” solid feeling that nothing can stop it or spoil the mood of its passengers. 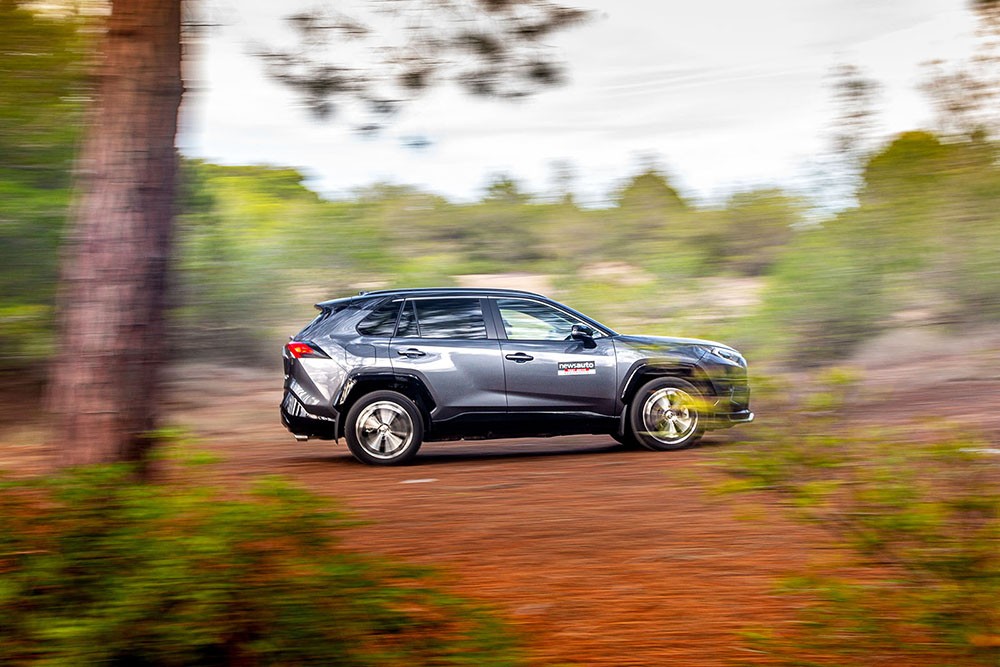 The steering system is good enough for the construction data, equally satisfactory are the brakes that have minimized the side effects from the energy recovery system, while the inclinations in the turns are controlled in the measures of the acceptable. The GA-K platform works wonders in dealing with heavy weights. While the low center of gravity combined with the advanced rear suspension with double wishbones, help to maintain this version a very balanced and safe driving character. 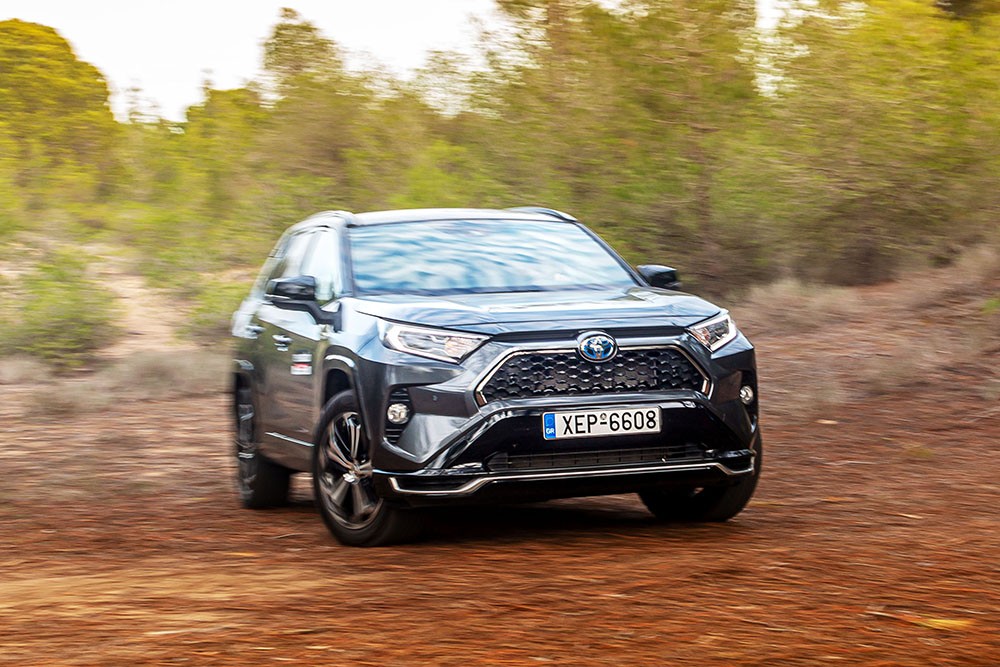 Off the asphalt, the “heavy jersey” plays its role again, with the Toyota to have done everything so that she the new electric four-wheel drive to be worthy of the countless “heavy and unhealthy” stamps of the company in hard off roading. Trail Mode with differential lock simulation works effectively for most drivers and situations and 19 cm from the ground is a sufficient distance, with asphalt tires being the ones that will first expose the whole effort for something more extreme.

And from quality and equipment?
In terms of body, the differences from the RAV4 of the rest of the range are discreet and are limited to some details in the finish on the grille and the lights. The most observant will notice the second “plug” on the rear right wing where there is the entrance for charging. In this version there are also larger 19-inch wheels. 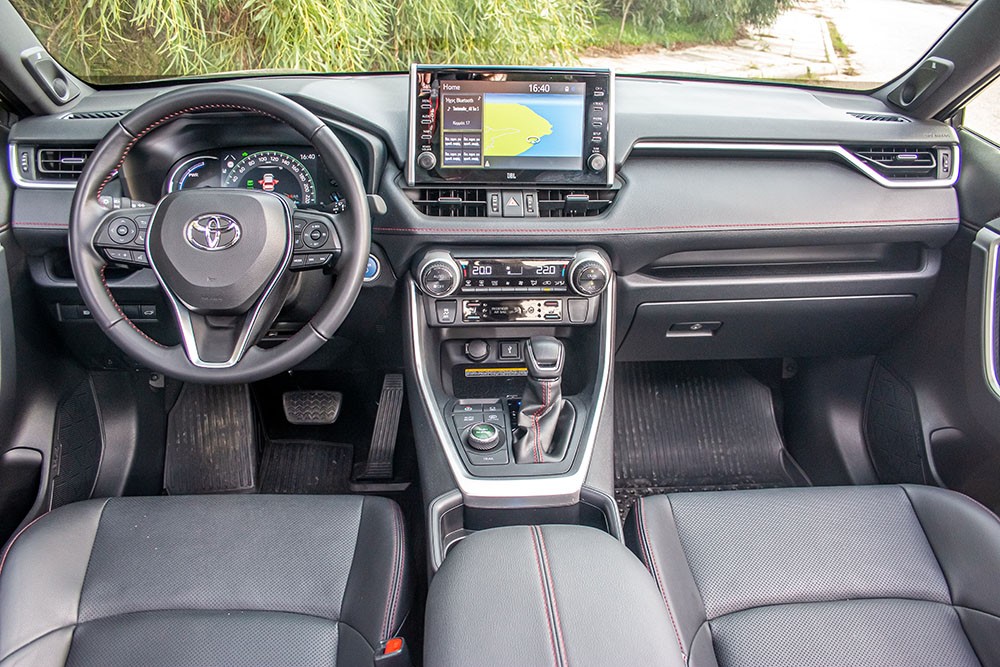 In the living room we find again the familiar “universe” of Toyota with the top-looking soft materials covering most of the dashboard and the typical design approach of the company, with emphasis on ergonomics and several -thankfully- natural switches for the most common functions.

Some obvious changes are related to the plug-in status of the car, such as the indicators on the instrument panel for charging and the battery level.

The digital package of interconnection and assistance systems corresponds to the high status of a Toyota flagship, featuring the complete Toyota Safety Sense package that includes all systems for safety and driver support. There are also various facilities such as p230V / 150W root for power supply of electrical appliances, wireless charging of mobile phones, sophisticated multimedia system and much more.

The spaces are another strong element of the RAV4 in this fifth generation, with passengers enjoying generous spaciousness and luggage space of up to 520 liters, despite the existence of the battery and the hybrid system.

Is it worth it in the end?
Summarizing, the plug-in hybrid RAV4 is currently perhaps the most targeted car of this hybrid “bridge” to electric propulsion. Mainly because it manages to be effective in its first and main goal, to be economical without “yes but” and without many asterisks. The consumption numbers that we recorded in our test and had constant repeatability are the indisputable controls. 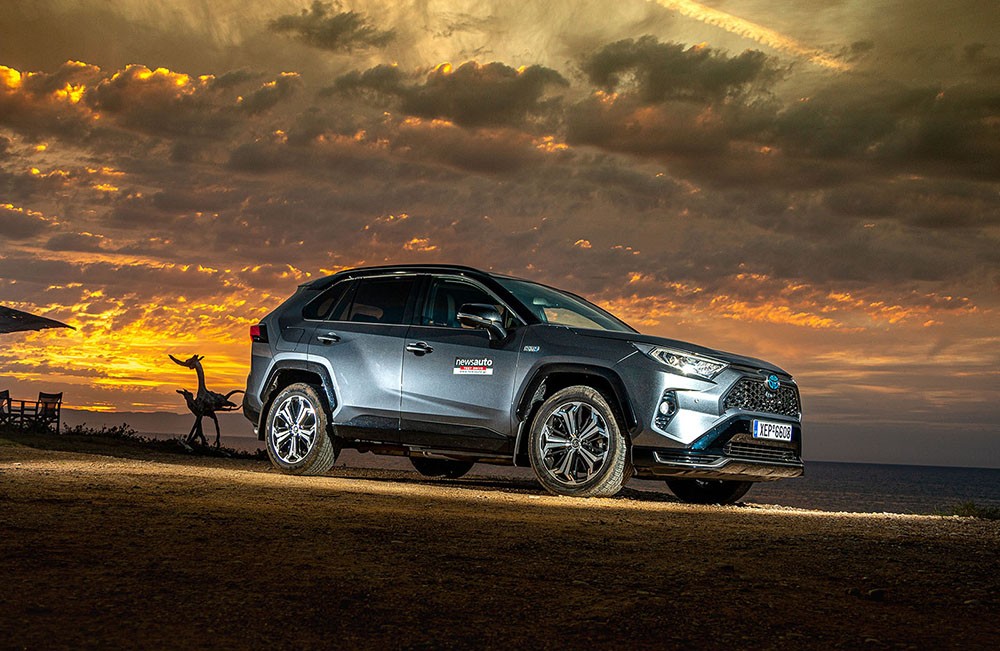 Beyond that, the RAV4 remains a leading presence in SUVs, combining the name and tradition of the highlander of the category with all the modern technological update required by the times and the competition. A competition that at 51 thousand is very important, with first-class names and equally advanced technological options. 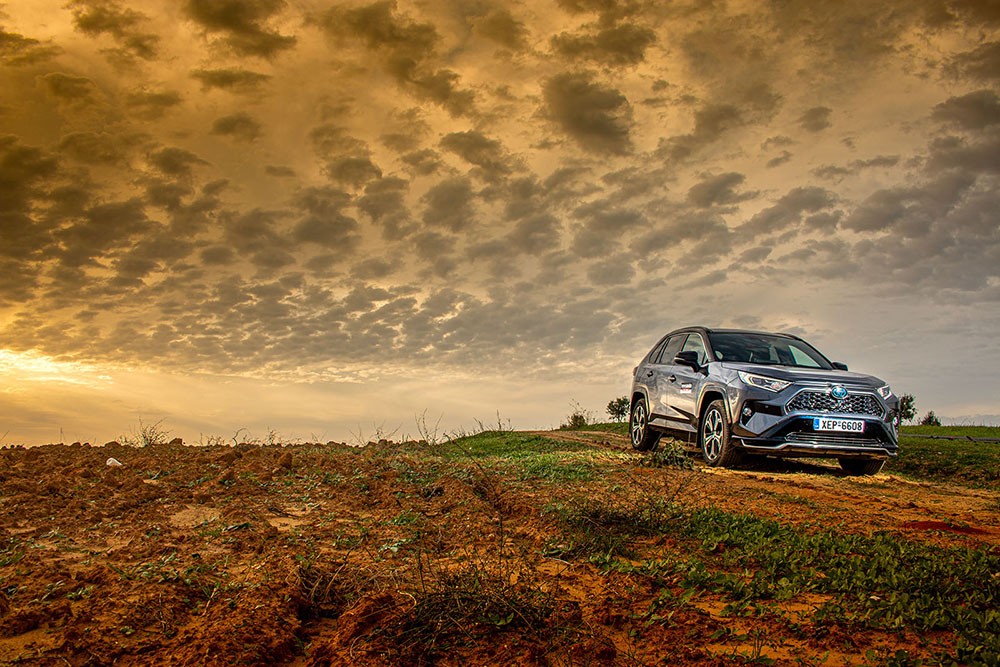 Εbut at least they reach their own holistic approach to the issue of “hybrid technology” and even fewer have behind them the huge know-how and its name Toyota to fill every choice with confidence. It costs a lot for sure. But it’s equally certain that in the case of the RAV4 PHEV, you get a lot more in return. As long as you can appreciate them.

Haval Dargo: This China SUV looks similar to the Bronco

The SUVs that started the fashion in Europe - Carneg.com