PS5 and mini-bar in this luxury Mercedes-Benz Sprinter 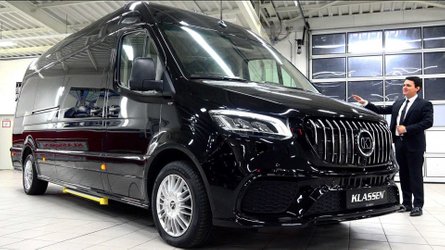 A van can transport goods or people. In Europe, a few manufacturers are neck and neck to win in this segment more aimed at professionals. Among them, there is Renault with its Trafic and Master, or Mercedes-Benz with its Vito and Sprinter.

The Mercedes-Benz Sprinter Tourer is intended for passenger transport. It exists with “three different body lengths, two roof heights and up to three rows of seats in the passenger area” can we read on the Mercedes website. The German tuner Klassen had the marvelous idea of ​​customizing it in the best possible way, and making it a luxury vehicle intended for VIPs.

As presented in the video, Klassen wanted to modify the exterior appearance of the van which now benefits from several parts inspired by the sports models of the brand with the star. If the bodywork is pleasing to the eye, the interior is even grander. Luxury reigns aboard this Sprinter by Klassen that can carry up to seven people comfortably installed on individual seats and worthy of the best armchairs.

It is exactly this kind of vehicle that artists use to go to their concert for example, and as the journey is sometimes quite long, Klassen installed a large screen connected to the new Playstation 5 and the Apple TV system so that guests never get bored. There is also a mini bar and a refrigerator between the two front seats.

As is customary, the price is taboo. Klassen will probably produce only a few copies of this exceptional van, the price of which should fluctuate around the 200 000 euros. It may seem expensive (and it is), but we must not forget that this product embeds equipment that even the most luxurious cars can not claim. Finally, luxury may be having a PS5 in your van and having a good time with friends.

Bad weather "Elpis": What is the snowstorm that will hit Attica? - Carneg.com