The Peugeot 9 × 8 is much more than just a race car, according to Matthias Hossann, Peugeot’s Design Director. It is an emblematic object, an aesthetic and technical revolution.

Before the prototype hit the runways, Hossann invited fashion and supercars photographer Agnieszka Doroszewicz to present it in her own way.

Set in a “harsh” architectural environment, before the Peugeot 9X8 faced the Endurance racetracks in 2022, it had its own photo shoot. This was an opportunity for the fashion photographer and supercars Agnieszka Doroszewicz, to play with light and its contrasts in an industrial setting. Her photos are a metaphor for the 24 Hours of Le Mans, a mythical race in which the light changes as the hours go by.

Peugeot’s design team worked hard to create the new 9 × 8 Hybrid Hypercar. He enriched it with all the modern aesthetic codes associated with the brand: feline posture, fluid lines enhanced by sporty character elements, elegant and structured sides and, of course, the characteristic lion’s three-claw luminous signature. Slim and elegant, the 9 × 8 evokes emotions.

Designing a racing car is every car designer’s dream. The most important element is the performance, to such an extent that the racing cars had become morphologically almost identical to each other. Thus the work of the designers was limited to the small details and the vividness of the image.

For the Peugeot 9 × 8 Hybrid Hypercar, engineers and designers worked very closely together to achieve a convergence between style and technology to create a competitive vehicle. 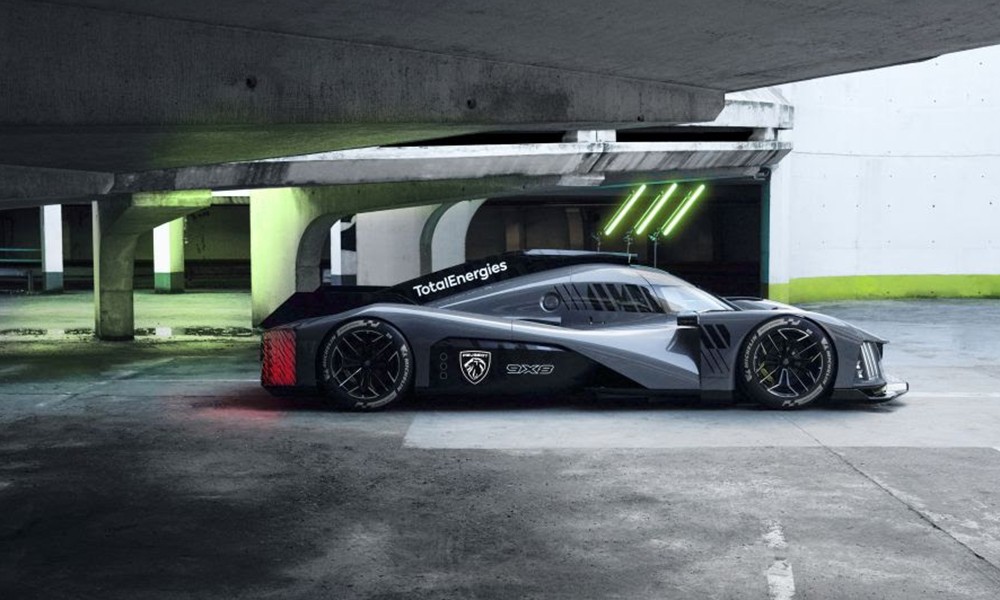 The ultimate ambassador of Peugeot Design and an inspiration for future developments, the Hybrid Hypercar 9X8 belongs to the trend set for the cars in the range, including the brand new Peugeot 308. It was the 9 × 8 that first bore the new Lion head brand, which was introduced in early 2021.

«The technology of PEUGEOT 9 × 8 is entirely a creation of PEUGEOT Sport and we had to show it in our design. Without compromising on performance, we wanted to give it a unique look, but also to keep the idea of ​​an improved body, which contrasts with the very geometric endurance cars of the previous generation.», explains Matthias Hossann.

Another Peugeot-style feature is evident in the 9 × 8 cab, which is based on the brand’s i-Cockpit feature. Just like for a production model project project, the care given to the interior design was combined with the demanding level of conditions for the exterior: The driver and the spectators in front of their screens should feel like they are in a Peugeot without any doubt at all. In addition, the entire 9 × 8 cockpit is designed to provide the highest degree of ergonomics and intuition for drivers.

The Peugeot 9 × 8 is a radical break with previous generations of racing cars. A new era is opening. «This 9 × 8 is a real milestone in motorsport and we will be lucky to be a part of it», said future drivers when they first saw it.

«On the walls of the design studio where the PEUGEOT 9X8 was born, we had posted three keywords: emblematic, effective, emotional», says Matthias Hossann. «In this way, the whole team embraced these concepts, regardless of the involvement of each individual in the various stages of development. I had put the word Iconic (emblematic) in everyone’s mind, because I wanted a car that is immediately recognizable and marks a major discovery, a fundamental generation change».

The most impressive feature of this race and what for many sums it up, is the absence of a rear wing, which gives it its unique morphology. The rear wing first appeared in endurance racing in Le Mans in 1967 and has since become the enduring standard. Since 1971, just over 50 years ago, no car has won without a rear wing.

When the Peugeot 9X8 was created, a huge effort was put into the rear of the vehicle. Following the original sketch of a somewhat ‘fluid’ car, a slightly pointed cab appeared, along with the very special cover we see today above the rear wheel.

Peugeot has already won at Le Mans with two cars of two different generations: the 905 with V10 petrol engine in 1992 and 1993, and the 908 with V12 HDi-FAP engine in 2009. Once again, the technology used Peugeot 9X8 marks the beginning of a new era. For its four-wheel drive hybrid drive, The 9X8 has some similarities with several models in the Peugeot range, such as the 3008 or the 508. It combines a 2.6-liter twin-turbocharged V6 2.6-liter internal combustion engine at the rear, with a 270-horsepower electric motor / generator at the front.

«We wanted to mark this technological and cultural change with a new color signature, which we named (Kryptonite) Kryptonite», adds Matthias Hossann.

The Peugeot design team also relied on cutting-edge technology. To create this, designers use 3D tools and CAD (Computer Aided Design). With this technology, it is also easy to share files with engineering teams. Once all the data was placed, then came the virtual reality stage.

The Peugeot design team includes fans of the 24 Hours of Le Mans race. Having been there as spectators, they know that at night, on the track, the cars have minimal distinctive features and characteristics. Some cars can be recognized by the sound of their engines, but in many places, the visual presence of cars is mainly limited to light lines that disappear during the night.

As the photographer for this series of Peugeot 9 × 8 images, Agnieszka Doroszewicz immediately recognized the potential of the 9 × 8 luminous signatures: «We really wanted to extend our download to a full day and extend it until late at nightSaid Doroszewicz, adding:I was able to achieve a perfect representation of the Le Mans 24 Hours match in my photos. Daylight, artificial lighting and headlights are combined with the powerful design of the car’s bright nails. Of course, we were not in Le Mans, but in the photo there is the whole atmosphere of Le Mans».