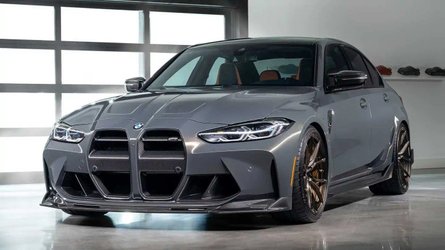 You know the game by now. If anyone tunes the new BMW M3 or M4, there’s a very good chance they’ll say: There was no shortage of controversy before, but now Company XY is upping the ante. Of course, one could say the same thing here. The M3 from US tuner Vorsteiner definitely draws attention.

This is primarily due to the new kidney. How could it be any different. The good piece is available in either plastic or carbon and uses significantly fewer horizontal struts than the original. Two, to be exact. M3 drivers in the States have the advantage that they can save the front license plate on the large jetty in the center grill. Of course it looks better. That has a bit of the M4 GT3 racing car that we tested last.

On the other hand, you can get a little idea of ​​what a future M3/M4 CS might look like. Vorsteiner provides assistance in the form of a front spoiler, new side skirts, a rear diffuser and a large rear spoiler lip. All parts are carbon fiber. The latter is particularly striking due to the central cut-out and the air-permeable design.

The gold wheels on the gray M3 (in the gallery below this article) look like 21 inches. The tuner does not give more details. We don’t learn anything about the obvious lowering either.

The roof box in the Precision Sport Industries pictures is interesting for all M3 fans with space requirements who don’t want or don’t want to wait for the first M3 Touring (G81). The US company has also specialized in the optimization of vehicles from Munich and supplies the additional storage space on the roof in the matching “Isle of Man Green”.

Incidentally, the aero kit from Vorsteiner, which turns the two performance Bavarians into the M3 and M4 VRS, costs 11,179 US dollars, which currently corresponds to 9,860 euros.

Burn tires for 150 thousand dollars a year: Dodge is looking for the creator of "donuts"