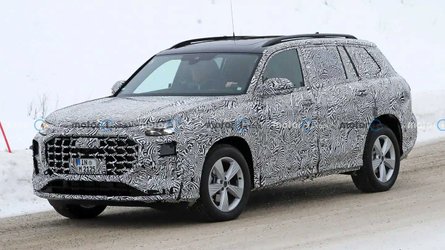 This mysterious Q model has now been seen more often. There is plenty of speculation about this. Even a new super flagship SUV has already been recognized in it. According to some commentators, that would be a Q9 that would be positioned above Q7 and Q8. Others say we see a standalone model for the Chinese market here.

This prompted us to trawl through some forums and websites in the People’s Republic and we now agree that this is by no means a new top-of-the-line SUV.

Instead, it can be assumed that the vehicle in question will only be sold in the most populous country on earth, through Volkswagen’s joint venture with SAIC. Other current models from the four rings that we owe to this alliance are the A7 L sedan and the Q5 e-tron. Incidentally, you can also see the latter in the attached gallery, more or less as an escort vehicle. It’s basically a slightly larger Q4 e-tron with three rows of seats, closely related to the Volkswagen ID.6.

The new XL SUV from Ingolstadt is probably mechanically related to the VW Atlas (in China and Russia as the Teramont). Consequently, it does not sit on the higher quality MLB platform such as the Q7 and Q8, but uses the all-encompassing MQB construction kit as a basis, on which a Golf is also located, among other things.

As for the name of the car, we’ve heard repeatedly that it will ultimately be called the Q6. However, there are no similarities with the Q6 e-tron, which is also scheduled to make its debut this year. Which in turn is based on the luxury electric platform PPE, which was developed together with Porsche.

As you can see, it’s complex. Mainly because you don’t want to believe what powerful companions can be realized on the MQB kit. The VW Talagon, for example, which was presented in China last year, is 5.15 meters long, and the Viloran minivan is even 5.34 meters long. For comparison: The Atlas is “only” 5.04 meters long.

The Q6 would inherit the three-row layout and engines of the Teramont. All of this, however, comes in a more luxurious package to justify the price premium.

The official debut will reportedly take place in April at the 2022 Beijing Auto Show. The market launch in China should then take place in the second quarter of the year.